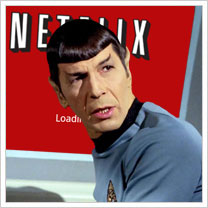 The wait is finally over. As of today, Netflix subscribers in the US will be able to watch every episode of The Original Series, The Next Generation, Voyager, and Enterprise through the Netflix online streaming service. All episodes of TOS and ENT are available in HD.

Subscribers will be able to stream every episode of each series online and on any Netflix-ready device, including Apple TV, iPhone, iPad, PS3, Xbox 360, Wii, and many more.

Tell us in the comments section, which episodes you’re most excited to see or watch again.