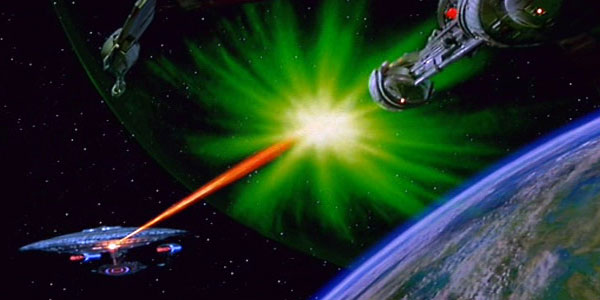 We’ve seen them on every Star Trek episode; phasers and futuristic weapons in science fiction are as fascinating and, in a lot of ways, as terrifying as gunpowder was to the Aztecs. The idea of futuristic laser weapons have been around since the time of H.G. Wells and they continue to influence the way we envision the future. But does reality fall short of our imagination, and is there really a limit to what we can achieve from technology? Science fiction brought us the site-to-site transporter, yet any hope of instantaneous teleportation was crushed by a simple rule in physics: the Heisenberg Uncertainty Principle (don’t get me started with the Heisenberg Compensator, it’s still impossible). So the big question of the day is: can we ever develop phasers and plasma-based weapons that could “melt” entire cities, vaporize Romulans (hehe), and mine dense asteroids for the resources stored inside their cores? Or are we stuck with this crude black sulfur- and nitrate-mixture for all eternity?

If you recall one of my earlier posts about transporter technology and how it may be impossible to transport someone with all the quantum particles in the correct places at the correct energy levels, site-to-site transport offers one very interesting (though impractical) facet of matter-to-energy conversion. Converting a 200-pound object completely into energy generates a beam of light with the destructive power of 130,000 atomic bombs. I jokingly said that if all else fails in transporter technology, then we at least know how to make a deadly laser beam with the ability to not only destroy ships, but planets too (the Death Star from Star Wars comes to mind).

This may very well be our phaser, although I think it would be overkill to create a handheld phaser that transmutes bits of matter into electromagnetic radiation capable of vaporizing whole planets. Instead, there may be a better idea: same concept, different mechanism.

We already have high-intensity light beams that are powerful enough to vaporize small materials and leave burn marks on sheets of metal. Scientifically speaking, they are photons, or rays of electromagnetic particles, that are optically amplified (i.e. using a simple magnifier) to render them hotter and more intense. The process of creating these high-energy light beams is called “Light Amplification by Stimulated Emission of Radiation,” or in short: L.A.S.E.R.

Lasers are becoming more and more commonplace now that we are entering a Golden Age of science and technology. Their applications range from entertainment to medicine; military applications also exist, although no handheld phasers yet. The coolest part is that nothing intricate or complex is required to generate a laser beam. All you need is a power source that emits electromagnetic radiation (i.e. light)…and a simple magnifier. One can create a laser using a magnifying glass to amplify sunlight into a focused beam of death that incinerates Romulans, Klingons, and ants.

We’re not at that stage yet to make deadly laser beams, but we’re getting pretty close. In this clip, the latest innovations in optical physics bring us the most powerful laser in the world, with applications in both futuristic weapon technology and energy production (i.e. cold fusion):

Based on this speculation, I would have to say that the concept of phaser weapons is a Science Fact. I do not know if they really would be lasers or if they are weapons that emit energetic particles (and certainly much more R&D would be required before one can invent directed-energy weapons). In any case, I am at least hopeful that such futuristic beam weapons could be developed in the future (especially considering the rapid advancement of modern technology). 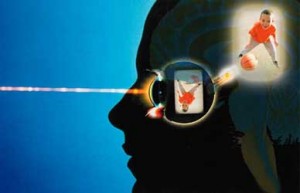 It is important to note that while phasers aren’t theoretically impossible, they may not become what we imagine them to be today. Phasers, if they are anything like lasers, are nothing more than propagated beams of light, which travels from point A to point B in one direction (a straight line). Lawrence Krauss, author of “The Physics of Star Trek,” discusses an “obvious [though overlooked] error” regarding phaser technology and he brings up a crucial point in his book: if phasers really are directed beams of light, how can they be visible? The fact of the matter is they should be invisible.

We can see objects because light shines on them and bounces back to our retinas so that the brain can interpret the stimuli to form an image. Well, lasers (and phasers for that matter) only shoot in one direction; unless we are in the path of the phaser beam (don’t try this at home, kids), we wouldn’t be able to see the phaser beam from any vantage point. Directing a laser pointer at a nearby wall reveals the laser dot but no laser beam. In order to see the beam, dust particles or some dilute, opaque medium must be present to cause the light beams to scatter midair, allowing you to see the path of the beam. In summation, phaser weapons are possible, but if one expects epic space battles with brilliantly colored streams of light flying across space, disintegrating enemy ships on impact…guess again.

Tom Caldwell has a Bachelor’s of Science in biochemistry from UCLA. He is currently working towards a Ph.D. in molecular biology