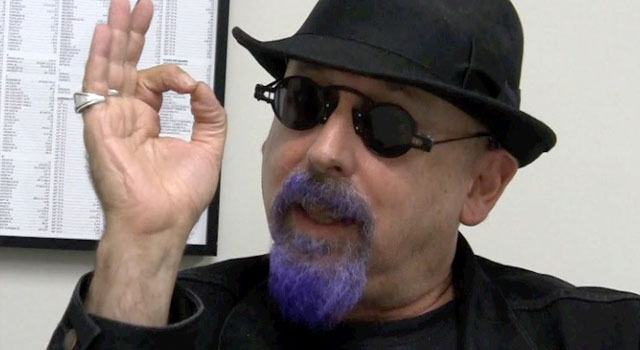 Writer-Producer Ira Steven Behr sat down with StarTrek.com for an in-depth discussion about his time working on The Next Generation and Deep Space Nine, with topics including the Dominion War, his favorite guest stars, the end of DS9, and his storied relationship with Executive Producer, Rick Berman.

Let’s get into DS9’s Dominion War arc. To some people, that was the best, boldest decision you could have made and, to others, it was the worst choice possible. What made you pull the trigger on the Dominion War and how surprised were you that you were even able to push that through?

Behr: Well, we had talked about it for years, the thought of, “If only we could be more serialized.” Look, we were drunk on wine and women. No. I felt the end coming. Obviously, we all did. We knew it’d be seven years and out. It was just, “Look, what do we want to do? Whatever it is, we should do it now.” Someone asked me on the last day of shooting why I was hanging around so long and I think the line I said was, “I have the rest of my life not to be here. So while I’m here, I’m going to stay until the end.” So it was the same thing. “What do we want to do?” One of the things we wanted to do was experiment with serialization and with the kind of space-opera war that spoke to a lot of the mythologies the show had built up. I thought we could do it. I knew we could do it. And then it became horse trading. I don’t even remember how many episodes we did, but I know we wanted more. Rick (Berman) and I went back and forth. Nothing terrible. No fights or anything like that. But we horse traded a bit and we came up with whatever it was.

If we forced you to sit down and watch three episodes of DS9, which three would you pick and why?

Behr: I only have 170-something to choose from, right? One of them would probably be “Duet,” I think. But I can’t pick three. It just doesn’t pay. On another day I might pick different episodes. Would it be ones I wrote or ones I didn’t write? There are so many episodes I’m proud of.

Who was DS9’s best guest star? Who were you the most thrilled to land?

Behr: I was very psyched when Frank Langella came on (as Minister Jaro). He didn’t want to put his name on the show. He said he wasn’t doing it because he liked Star Trek, but for his nieces or his nephews; you know, that excuse. But at the time I was psyched that we got Frank Langella to do three episodes. We had Jeff Combs and Andy Robinson and Marc Alaimo, that whole band of brothers. We had Wally Shawn, though in seven years I only saw him once. I had many conversations with Wally, but only once did I talk to him when he didn’t have aFerengi head on.

DS9 had some very funky episode titles. Which one struck you as the funkiest?

Behr: Well, the one I make fun of most and, in fact, here at Alphas I’ve already referenced it five different times, was ‘Wrongs Darker Than Death Or Night.” Hans (Beimler) came up with the title and he was so proud of it. We were coming up with all these pretentious, heavy-sounding titles. Robert (Hewitt Wolfe) and I were talking about this a couple of weeks ago and we were laughing our heads off because he was so proud of Hans, because… “Wrongs Darker Than Death Or Night.” What wrongs could be darker than death? Or night? So that was probably my favorite title because it proved a point. A useless point; but it proved a point.

Once and for all, describe your relationship with Rick Berman.

Behr: Why does anyone care?

People care, in part because there were so many rumors…

Behr: If I saw Rick Berman on the street today I would hug him. We ran into each other during the writers’ strike and we hugged. Did we agree all the time? No. Could we talk about that? Sure, we could, but what’s the point? Given the fact that we were part of this monolithic franchise, DS9 pushed the envelope as far as we could at that time in that situation. Could we have gone farther? Sure. Would the fans have gone with us? Not all of them, clearly. On a day-to-day basis I would say over the course of seven years we had a pretty good working relationship. We disagreed on lots of small and large things, but he went in there with me to fight for Avery Brooks, to shave his head and keep the goat. We walked across the lot together to the executive offices. We were jazzed and we had this disk of how he looked, and we were a team to do that. We got there and they immediately gave up, which was funny after three years. We were all set to go in with guns blazing and they said, “OK.” So it was a little anticlimactic, but we were a team at that moment. It’s one of the things that profoundly confuses me about the whole Star Trek(experience), is my relationship with Rick Berman, why people care or what that even means, what my relationship was.

Some people love DS9 and consider it the best Trek show and other people refuse to even acknowledge it as Trek. Do those extreme reactions tell you that you did your job properly?

Behr: Not particularly. I’ll tell you this: no one, I don’t care what the hell the show is, whether it’s Alphas, DS9, Fame, whatever it is, no one judges my work or the work I’m involved with harder than I do or with a sterner rating system than I do. So, what other people think… all I cared about at the end of the day was, “Did I think we were doing the best job we could do?” Then the fans could be fans, like I’m a fan with other things. They make their decisions and that’s fine, too. But how do I feel about the show? Do I feel good or not?

Last question about Trek. Would you ever want to do more DS9 or is it better to leave everything where it ended with the finale?

The complete two-part interview can be found on the  StarTrek.com website.