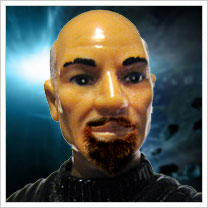 In the wake of William Shatner’s official statement regarding his non-participation in the next installment of the rebooted Star Trek franchise, it appears at least one more prominent Trek personality will also be missing from the upcoming film. The following excerpts were taken from an official press release… which I found stapled to my shin Thursday morning when I woke up… in terrible pain:

“No, I will freakin’ NOT be appearing in a ‘cameo role’ in the next Star Trek flick,” Evil Picard told a group of confused passers-by in front of the San Diego Convention Center this morning. “I’m not sure WHY I won’t be appearing, since I’ve spent more time in the command chair then that Pine kid, but what can ya’ do? Maybe they can’t afford me.”

Evil Picard went on to say that while he would not consider himself a close friend of J.J. Abrams, director of the 2009 reboot and its upcoming sequel, he had become an acquaintance of the acclaimed film-maker:

“Yeah, me and J-Bro are ‘acquainted,’ you could say,” Evil Picard continued. “Back in April I ‘let myself in’ to his place… I wanted to pick a fight with that Bad Robot character. Somethin’ about the shape of his head bugs me. Anyway, I didn’t find the robot, but on my way out the back window with $732 worth of Alias memorabilia I did see 2-J… speaking of which: if you’re readin’ this, J.J., can we reschedule the time of the ransom drop-off? I forgot and made a date for next Tuesday, sorry pal. The stuff’s still here, I swear.”

Evil Picard also suggested an “inside source” had informed him that production on the new motion picture was being stalled due to “wizards or something” and claimed that more information would be revealed to fans who purchase the Star Trek: The Next Generation Motion Picture Collection on Bluy-ray and watch all four films in sequence, reflected in a mirror, in reverse, six times.

None of these claims could be verified by press time, however, as the FBI was quick to confiscate the press release as “key evidence in an ongoing investigation.” TrekNews will continue to follow this non-story as it… non-develops.