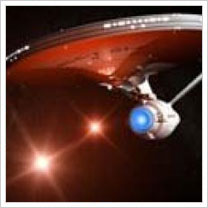 Photon torpedoes are mentioned (and used) in almost every Star Trek episode, and quantum torpedoes were referenced heavily in Deep Space Nine and the TNG movies. It would seem that if phasers are possible (based on a previous post), then certainly torpedoes are just as likely. We already have submarine torpedoes and missiles today, so what can be so difficult about packing a bunch of TNT into a metal casing and firing it into space? There is a lot to consider here and the technology isn’t as clear cut as simple lasers. After all, Memory Alpha and the Star Trek Technical Manual describe photon torpedoes as “antimatter warheads” (source: Memory Alpha), and that claim alone makes the technology a lot more difficult to attain. Going on this assertion, let’s see if photon torpedoes are technically plausible or if realistic science ultimately blows them out of the stars.

The destructive power of photon torpedoes comes from an unstable reaction mixture between matter and antimatter; the two annihilate one another to release tremendous amounts of energy. For more information on antimatter, the reader may wish to refer to my previous article on antimatter reactors or simply watch this video:

In other words, photon torpedoes are metal casings that suspend positrons (a form of antimatter that reacts violently with electrons) in an internal magnetic field, which collapses on impact and brings the antimatter into contact with normal matter. The collision of both types of particles generates an incredibly violent explosion. Assuming a typical warhead contains just 1 milligram of antimatter, a photon torpedo would release 180 million kilojoules (equivalent to 43 metric tons of TNT). A photon torpedo carrying this yield would look something like this (and bear in mind, this is the result of only 1 milligram of antimatter):

One advantage to using a photon torpedo as an explosive device in space is the lack of combustible oxygen. The combustion of an explosive fuel source, like TNT, requires oxygen as a reactant, and no such reaction could occur in the absence of oxygen (which is why fire cannot exist in a vacuum, let alone in space). Immediately, a problem arises in space-borne warfare: how can one use explosives in space without any oxygen to ignite the agent? Matter-antimatter reactions do not require oxygen; in fact, the annihilation of antimatter occurs spontaneously at the quantum level, so antimatter weapons are effective in any environment. Essentially, the absence of oxygen in space bears no sway on the explosive output of antimatter annihilation. Photon torpedoes would work just as well in space as they would in an atmosphere.

Once again, Star Trek demonstrates its unwavering fealty to science. We do indeed have the ability to produce antimatter today and it is a real scientific concept. Scientists are able to produce antimatter in huge particle colliders like the ones at CERN and FermiLab (even though only a few nanograms have ever been produced and maintained for only a few milliseconds). Given that antimatter can be created, the prospect for photon torpedoes is looking a little brighter.

The technology of photon torpedoes is quite possibly a Science Fact, though there are severe limitations, which make photon torpedoes less likely a possibility than phasers. The production costs of antimatter are incredibly steep: up to $25 billion per gram. Antimatter is one of the scarcest resources in the Universe, so harvesting antimatter is also impractical. If Mankind plans on using photon torpedoes in the future, mass production is out of the question as there may only be enough antimatter to make a few torpedoes, each carrying only a few micrograms (or even nanograms) of antimatter. We may have to contend with much lower yields of antimatter than we would wish.
Another impracticality of using torpedoes in space is Newton’s First Law of Motion, which states that an object in uniform motion (traveling in a straight line) or at rest will remain in its current state until acted upon by an external force. Photon torpedoes on Star Trek are famed for their accuracy and maneuverability; they track down and destroy their targets with deadly precision. However, the aerodynamic ability of missiles and jet airplanes comes from air resistance. In order for an object to make sharp turns, loops, and apply enough force to change its direction of motion, a force must be propagated against the direction of the object’s path and another force must be applied in a new direction. That is why planes are designed with wing flaps to take advantage of air resistance and adjust air flow on either side. Manipulating and applying forces due to air resistance on the airplane allows it to maneuver and change direction.

As mentioned previously, space is a vacuum, so air resistance doesn’t exist. Firing a torpedo in space will simply make the torpedo travel in a straight line, with or without thrusters, forever and ever until it hits something. If the torpedo were to thrust left while in forward motion, the torpedo will not change its direction completely to the left: it will travel diagonally. Applying a force in a new direction does not cancel out the previous vector (unless a force is applied against the torpedo’s forward motion). This is simply because vectors are additive; force vectors applied in the forward direction and the left direction creates a resultant net vector in the diagonal (left-forward) direction.

Assuming the Enterprise and the Romulan Bird of Prey do not move, a torpedo shot head on will destroy the enemy ship.

Now assume the Romulan Bird of Prey moved out of the way and is now to the left (from the reader’s vantage point). Firing a torpedo this time in the forward direction while still trying to apply a force (i.e. thrusters) in the direction of the Bird of Prey will not cause the torpedo to change direction immediately. In fact, while the forward vector remains unchanged, it will only proceed diagonally until stopped or slowed down by some external force (or if it hits something else). The lack of air resistance makes torpedo movement sluggish and difficult, hardly ideal when attempting to destroy moving targets. However, it doesn’t mean we can’t use photon torpedoes in the future; it simply means space combat would no longer be as exciting as this: