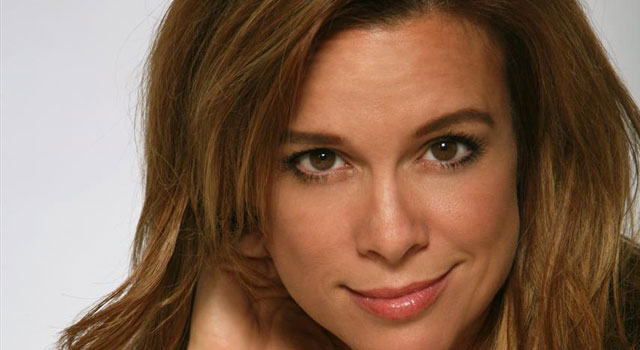 Chase Masterson, who played the Bajoran dabo girl Leeta on Star Trek: Deep Space Nine, recently sat down for an interview with BuddyTV. During the interview Chase talks about her experiences on DS9, Star Trek fans, and her San Diego Comic-Con panel “Obsession”, which takes place on Thursday.

Below is an excerpt from that interview.

What has been your experience with Star Trek fans over the years?

Chase Masterson: I am so utterly thankful and in awe that I’ve had the experiences overall that I’ve had withTrek fans. It breaks my heart — it seriously really irks me — what the media often does in exploiting the relatively very few that fit the stereotype they like to propagate. Trek fans are, by and large, the most intelligent, forward-thinking, globally aware and sensitive group of people I’ve ever met, or could ever hope to. They are extremely respectful and supportive – that’s one huge reason that I wanted to be on the show. And they also support the causes we care about. It’s a very active, kinetic group.

But they’re also like the coolest revolving door; simply put, what you put in is exactly what you get out.

It also bothers me when some actors ignore their Trek roots. I just want to say to them, “Excuse me, do you realize that without these people, you would probably be doing the Easter play in Fullerton?”

Do you have an acting role that was your favorite? Which one and why?

Chase Masterson: There’s obviously a special place in my heart for Leeta, for many reasons. But the role in which I have most respect for my own work is definitely that of Singer in Yesterday Was a Lie, a critically acclaimed sci-fi noir feature shot in classic black and white, which was released in 2009 and out on DVD through Entertainment One last year.

I play a jazz singer, and I sing four songs in the film. In addition to the richness of that, the character is written extremely well — the entire film is a tribute to writer/director James Kerwin’s genius. She’s the Trickster in the Jungian pantheon, the second lead in the film, and she leads the central character, Hoyle, on a journey to discover a secret she’s hidden from herself. She gets to employ different means to pique Hoyle’s interest, and the end result is an extremely thought-provoking exploration of sensitivity and responsibility in relationships. That’s something I believe strongly in. And it’s not necessarily a popular or often-done theme in Hollywood, onscreen or off. But people appreciate it, for exactly that reason.

It’s a very cool film, and we’ve gotten a stellar response. If you haven’t seen it, check it out.

Why do you think Star Trek fans tend to be more involved and engaged than fans of other shows?

Chase Masterson: The messages of the show lend themselves to deep thinkers. Infinite Diversity in Infinite Combinations. The Prime Directive. Heck, the Rules of Acquisition! (OK, maybe not.)

These are concepts that require thought and provoke conversation. The shows stand for precepts and visions of a better universe and world that isn’t an easy one to create but is somehow still looming in the distance of the most idealistic, hopeful parts of our hearts. Those concepts are based in justice. They’re based in ideas that are just plain right, and no matter how far removed people or relationships or societies get from justice, we know in our hearts what is good.

The other really attractive things about DS9 in particular were the flawed characters who were still heroes. We see that in ourselves; we’re not perfect, but we strive to redeem ourselves in the ways we can. Tough choices dictate our actions. There’s an anti-hero in all of us; we don’t always succeed in doing the right thing, and we don’t always want to. But we have our redemptive moments. That makes for the intriguing characters and situations, which Trek audiences thrive on and expect.

How do you think actual interactions between aliens and humans would go? Would it be anything like on Star Trek?

You mean like the Prime Directive and IDIC? Frankly, given human nature, I’m afraid it would be more likeMars Attacks, or vice-versa. Probably humans would screw it up out of either panic or thirst for power. I’m hoping that, if there is alien life out there, they’re more advanced than we are. Robert J. Sawyer mused on this subject in an extremely compelling way in his novel, Calculating God. I’m not sure that human society would be capable of making peace with alien races. At least not until we can learn to make peace with each other.

Chase Masterson: There are a few extremely cool things in the pipeline, both film and music. My first wide-release commercial CD will be out in the next few months — Thrill of the Chase — stay tuned for that.

The film I mentioned, Yesterday Was a Lie, is my latest completed project. It took a very long time — I actually produced it — and I’m getting back to work on other things now. But the time that it took was well-spent; we’re getting some excellent opportunities based on our work in that. Indie film takes way longer than any other form of entertainment, but I’m enjoying the process because it’s so highly creative and because we retain the right to do what we want to do.

Because of YWaL’s intellectual, science-fiction premise — the film takes place in non-linear time — the film is one that challenges its audience. The film got a lot of excellent reviews, but my favorite one was from Pop Matters, who said a lot of excellent things and then concluded with, “But be warned: it won’t hold your hand.”

Since you have worked as both an actress and a singer, which do you prefer?

Chase Masterson: People ask that, and it’s really hard to say. Singing is really just acting on key. The difference for me is in the aspect of team. I love working on the studio lots, where there is a real feeling of camaraderie, where everyone is happy to be at work, creating together. Music is also a very collaborative process, but for me anyway, it’s not as rich as film and TV in terms of its creative process. And its reach. So in the final analysis, acting wins over singing. But I’ll always do both.

Have you been to Comic-Con before? What are you looking forward to the most this year?

Chase Masterson: I’ve been going to Comic-Con since way before Comic-Con was cool. My first was in ’96. It’s a little amusing, frankly, to see all the shows & films scramble to get their geek on, even if they don’t have any actual geek cred. And it’s definitely a badge of honor to have been a part of the property that started it all — Trek cons existed even before Comic-Cons or any cons were widely produced, with the exception of Dr. Who. (But that’s such an awesome show, it’s ok.)

What do I like most? It’s always a big reunion. Big fun seeing lots of old friends from past work, with everybody celebrating new stuff.

You can read the complete interview with Chase Masterson at BuddyTV.