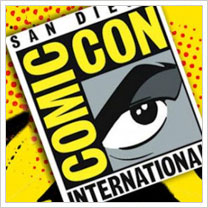 San Diego Comic-Con, the annual comic book and genre mega-convention kicks off Wednesday July 21st with a preview night at the San Diego Convention Center. Below, we’ve compiled your guide to the yearly gathering of cultural fans and forces as related to the Star Trek universe, including panels, exhibitor exclusives and more.

The Captains
William Shatner will be hosting a panel on his new documentary The Captains along with DS9’s Avery Brooks on Friday from 10:15 AM in room 6BCF. The panel, moderated by director Kevin Smith, will explore the EPIX Pictures production, which follows Bill on his 97-minute mission to interview all of the actors who have depicted past (and, in Chris Pine’s case, present) Starfleet captains.

Additionally, there will be other Star Trek actors and producers on-hand to present and promote their latest projects, including Patrick Stewart, Zachary Quinto, Wil Wheaton and Chase Masterson.

CBS (Booth #4129): If you’re a fan of free wristbands and/or stainless steel Enterprise Bottle Opener Keychains, this will be the place to be. StarTrek.com will be offering red, blue and yellow variations of the former, complete with famous series quotes, while there will be 1,701 of the latter item, which will be a U.K. exclusive later this year.

There will also be photo ops with Orion Slave Girls and a costume contest awarding first place with a Mark IX Tricorder and second place with a Star Trek Vault, an item that will be on display at the Abrams booth (#1216), along with author Scott Tipton.

Anovos (Booth #2913-E): In case you miss the aformentioned Slave Girls at the CBS booth, they can also be found here, along with uniform models and an exclusive three-badge pin set for the low offering of $20.

Chronicle Books (Booth #1506): Trek-trivia maniacs will feel right at home here, where the publisher will be showing off its new book, Obsessed with Star Trek, which will include trivia from all of the series and first ten films. Author Chip Carter will additionally be providing autographs on Thursday, July 21st from 2 p.m. to 3 p.m. and Saturday, July 23rd from 10 a.m. to 11 a.m.

Hallmark (Booth #2343): Christmas comes early here with a preview of 2012 Star Trek-themed ornaments. Other holidays and/or special events need not feel left out, as the company will also be showing off their new Trek greeting cards.

Lightspeed Fine Art (Booth #3745): The company will be showcasing five new, limited-edition lithographs titled “Trading Places”, which depict all of the Trek captains in an alter-ego persona from the shows. Additionally, LeVar Burton, Michael Dorn, Robert Picardo, Saul Rubinek, Marina Sirtis, Brent Spiner and others will be on-site for autographs.

Quantum Mechanix (Booth #2994): A booth sure to please replica afficionados, QMx will be displaying the Reboot Enterprise Artisan, the Kirk Animated Marquette, the Enterprise “Refit” Artisan, and other replicas, as well as offering phaser replicas for purchase.

Quirk Books (Booth #1636): Taking a cue from perennial favorite “Mirror, Mirror”, the publisher will be displaying its upcoming title, Star Trek: Book of Opposites, which will have its release this September.

Larry Nemecek’s TREKLAND: Larry Nemecek will be signing autographs and talking TREKLAND as well as “The Con of Wrath”, his new documentary project, in autograph alley from 2:30 PM to 7 PM on both Friday and Saturday.

Look for more previews and continuing coverage in the coming days here at TrekNews.net.

In this article:SDCC, The Captains, William Shatner