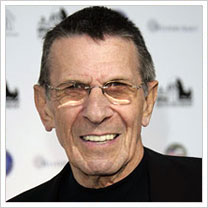 Following Leonard Nimoy’s announcement on Tuesday that he’ll be retiring from conventions, Creation Entertainment issued the following statement regarding his decision:

For over 45 years Leonard Nimoy has had a special place in the hearts of Star Trek fans and he has truly become an international icon beloved throughout the galaxy. During our careers Leonard has become a mentor to us and he means the world to all here at Creation as he does to you. After decades of providing the very finest in entertainment in all media Mr. Nimoy has today announced his retirement from convention appearances, including Creation’s Official STAR TREK Conventions in Las Vegas (August 11-14, 2011 and Chicago September 30-October 2, 2011).

For us at Creation it is indeed a bittersweet day as Leonard’s on-stage talks have always been a highlight for us and they remain in our memories forever. We’ll never forget his original talks on being Mr. Spock, his on-stage appearances with William Shatner, his live Alien Voices shows with John de Lancie, and later his ceremonial passing of the baton to the amazingly talented young Zachary Quinto. Through it all Leonard has been extremely gracious and caring to both us and his legions of fans. Simply stated it has been a joy to meet someone we grew up with loving on television and film and then finding out he was even nicer than we could have hoped. A growing up memory that was actually exceeded by reality: that never happens but all things are possible with the magic that has been working with Mr. Nimoy.

We invite YOU to be with us to bring down the house one last time for the man who has been the true heart of the incredible Star Trek franchise. Both conventions are now sure to be sold out so please book early and pick up your autographs and photo ops with Mr. Nimoy! God Bless Leonard as he enjoys his overdue retirement and we continue to enjoy his films, television series, books, photography and poems for generations to come!

FOR INFORMATION ON THE OFFICIAL STAR TREK CONVENTION IN VEGAS:
https://www.creationent.com/cal/stlv.htm

FOR INFORMATION ON THE OFFICIAL STAR TREK CONVENTION IN CHICAGO:
https://www.creationent.com/cal/stchi.htm

In this article:Creation Entertainment, Leonard Nimoy