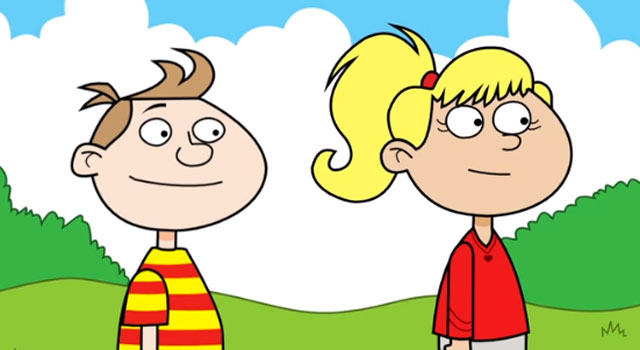 Today Skywriter Media and Entertainment Group announced that the Roddenberry Productions webcomic by Trevor Roth and David Reddick “Gene’s Journal” will be made into an animated series.

Read the press release below for details on the project.

A chronicle of legendary science-fiction icon Gene Roddenberry’s adolescent years, the new animated Gene’s Journal will be targeted to Kids 6-11. Alex Galatis (Atomic Betty, Jimmy Two Shoes) is attached to the project as head writer of the new series.

“We are beaming with excitement at the opportunity to bring television audiences a glimpse into the life and experiences that shaped a young Gene Roddenberry into one of the greatest and most imaginative storytelling minds of the 20th century. Roddenberry’s successful web comic offers a wonderful foundation for this fantastic journey and we look forward to expanding on it in an animated series worthy of the Roddenberry tradition,” said Gillis.

“It’s fun to play with the what-could-have-been part of my father’s life. Gene’s Journal is a concept full of imagination and possibility. I’ve always thought about what the idea could become when it’s able to really spread its wings in a new medium. I couldn’t be more thrilled than to see it making that evolutionary step, and I can’t think of any better place to announce it than here at Comic Con,” said Rod Roddenberry.

“There’s nothing better than working with people who recognize the true potential of a concept you created. Gene’s Journal has always been the story of a unique young boy trying to reconcile the trials and tribulations of adolescence with the hilarity that science fiction has to offer. To adventure into the childhood of such an extraordinary character alongside Alex and Kevin is going to be a real treat, for Roddenberry and for TV audiences,” said Roth.

Gene’s Journal® is the untold, true story behind the adolescent years of Gene Roddenberry. It was during these years that Gene was continuously abducted by aliens for the extraterrestrial purpose of studying human beings – all of his experiences recorded faithfully in his boyhood journal.

The fantastic stories detailing the alien wonders he encountered would later inspire Gene to create some of the greatest science fiction television the world has ever seen. However, in the childhood moments of these experiences, Gene found them to be less than inspiring. Young Gene is constantly trying to reconcile his earthling life with the hilarious alien encounters. After all, it’s quite hard to do your homework, meets girls, play on sports teams, etc., when aliens from the future continue to abduct you for their outlandish needs, missions and entertainment.

About Skywriter Media and Entertainment Group
Headquartered in Toronto, Skywriter Media and Entertainment Group is a fully integrated producer and distributor of original programming and content for all forms of traditional and digital media worldwide. Skywriter was launched in August 2009 by distinguished entertainment industry executives Kevin Gillis (Chief Executive Officer), Michael McLaughlin (President) and Michael Iscove (Chief Operating Officer/Chief Financial Officer) as a company committed to the creation, development, financing, acquisition and distribution of quality children’s and family entertainment for the global marketplace. In addition, Skywriter focuses on the production, distribution and marketing of advertiser-supported content for all emerging media in association with leading advertising agencies, technology and digital media companies. Conceived as a destination partner for the entertainment community, Skywriter is a one-stop source for producers of programming and broadcasters alike that nurtures the creative process and delivers the highest quality product to the global marketplace. For more information about Skywriter Media & Entertainment Group, please visit www.skywritermedia.com.