In the last installment of Science Fiction or Science Fact, it was reasoned that the photon torpedo is a technological possibility. It may be impractical to utilize, but it would become a terrifying weapon of mass destruction. Just how can anyone defend themselves from that sort of firepower? Such a defensive capability is mentioned on the shows of Star Trek: the deflector shields. Star Trek describes the deflector shield as a force field that deflects massive objects (like torpedoes) and absorbs power from phaser impacts so that they do not damage the targeted ship. Are invisible energy shields possible? Can we raise our shields to defend ourselves from other technological possibilities like phasers and photon torpedoes? In this discussion, the fate of shield technology will be decided.

The concept of a shield is a lot less conceivable than it sounds. Creating an invisible force field with the protective capability of disintegrating oncoming photon torpedoes and phaser fire is a very difficult engineering feat. Energy isn’t some mystical substance that can be molded and shaped into exotic space-filling structures; it is simply the capacity of a system to perform thermodynamic work. Energy is required to lower the entropy of a system already at equilibrium, and energy is liberated when a chemical reaction occurs spontaneously in a closed, isolated system. The terms “energy bubble” and “energy shield” are highly unrealistic in conventional physics. When constructing our hypothetical shield, we must refrain from science fantasy and the concept of a shield as a form of energy. In so far as physics is concerned, shield technology may require an application of electromagnetism.

I gained inspiration of a hypothetical shield from Michio Kaku’s “Physics of the Impossible,” a text that details the scientific plausibility of common themes in science fiction (yes, we scientists are total nerds). In it, Kaku describes a plasma window in which scientists have been able to partition a vacuum from an atmosphere using plasma conformed to magnetic and electric fields. That might not seem all too interesting, but think of it this way: the plasma shield is literally an invisible wall of superheated, ionized gas that is so dense and so compacted together by magnetic fields that even air molecules on one side cannot penetrate it. A window of thin plasma could be sufficient to replace the plexiglass windows on space shuttles used by NASA in the future, but I digress. From this information and my knowledge of basic electromagnetism, I have attempted to develop a plasma shield that isn’t dissimilar to the shield showcased on Star Trek. 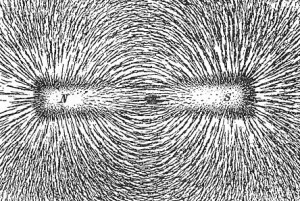 Electric fields are a little harder to visualize and requires a more comprehensive experiment, but it is the same principle as magnetism: lines of force that travel from positive charge to negative.

The Right Hand Rule states that a uniform magnetic field (in the direction of your right hand fingers) will propagate a force on a moving charged particle (in the direction of your right hand thumb) such that the particle will have a tendency to move perpendicular to both the thumb and the fingers (in the direction of the palm if the particle is positively charged; in the direction of the knuckles if negatively charged). The net result of a moving electron (initially traveling up your computer screen) in a uniform magnetic field propagated into this computer screen will travel in a clockwise circle. Physicist J. J. Thomson applied this phenomenon to discover and precisely measure the mass of an electron; a very simple, yet elegant, application of mathematics and physics that eventually paved the way for future inventions, from mass spectrometers to plasma TVs nearly a century later. 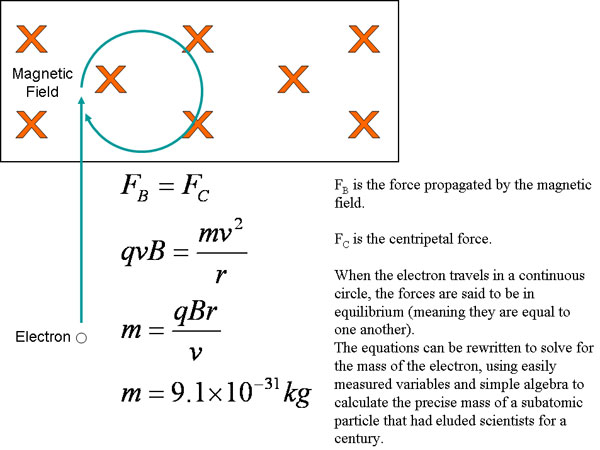 An electric field can induce a magnetic field perpendicular to itself, and a magnetic field can induce an electric field in the same fashion. It is the same principle on which wind turbines and nuclear reactors are based; one can use a spinning magnet in a wind turbine to generate an electric current in a set of wires. Or, one can use an electric current from a power source to charge a solenoid that propagates a magnetic field in order to operate a car engine. All these machines of science were developed on the understanding of electromagnetism, and one more machine might be added to this long list of creative inventions.

In reference to the images below of the Enterprise D, a theoretical shield generator would utilize a parallel plate capacitor charged by power source. The capacitor would establish an electric field (cyan dotted arrows) between the plates, which in turn establishes a magnetic field (orange arrows) around the capacitor. If one were to incorporate large enough capacitor with a sufficiently strong power source, a magnetic field can be propagated around the entire ship. 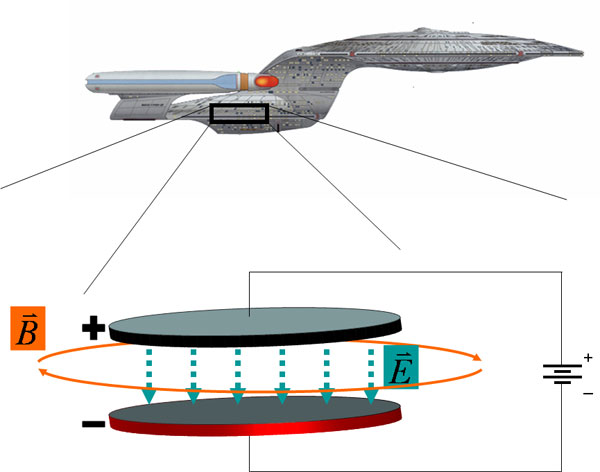 For the same reason an electron travels in a spherical shape when influenced by magnetic fields, plasma could be ejected at either the dorsal or ventral sides of the Enterprise to establish a spherical shell around the ship. Plasma is superheated, ionized gas and it can either be negatively charged or positively charged. 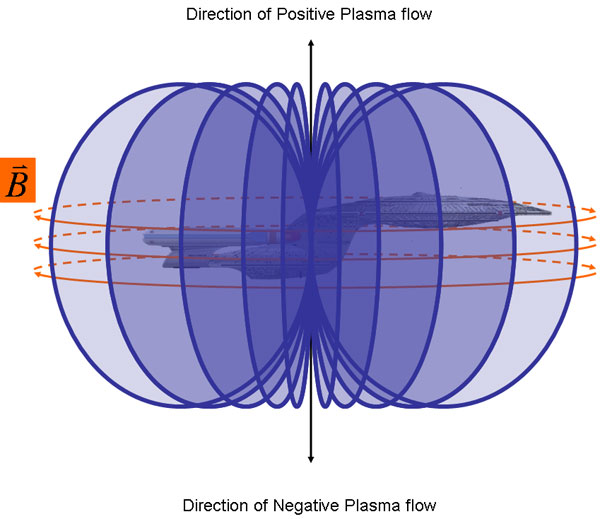 Plasma is an ideal source for the shield because it can be molded into any geometric arrangement (limited to the propagation of magnetic fields, of course); in this particular setup, the plasma shield would encompass the ship in doughnut form (shown in the image as cross sections). A very worthy rationale for plasma shields is that plasma, when condensed tightly enough around the ship, is hot enough to vaporize metallic objects like photon torpedoes (though several layers of plasma may be necessary to do that); furthermore, plasma has an electronic state that can absorb photons from focused laser beams, so it would be effective at protecting the ship from incoming phaser fire. Another advantage of using plasma as a shield barrier in space is that there are no air molecules to absorb heat from the plasma, so the energy contained in the shield will not dissipate to the vacuum of space. In other words, the shield will remain hot and stable.

While shields may be inconceivable as a bubble of energy, they may exist in the form of plasma. In light of this argument, deflector shields may be a Science Fact, although that does not mean it is 100% possible. Like any other form of technology, there are limitations to its use.

The last, and perhaps most severe limitation of plasma shields, especially with regards to space combat, is that the plasma shield is not only effective at blocking phasers and torpedoes from enemy ships, but it is also effective at blocking weapons’ fire from inside the shield. The ship’s weapons would be useless while the shield generator is active because the ship’s phasers and projectiles would not penetrate the plasma.

NASA is already developing a plasma shield for future space flights to Mars. When traveling beyond the confines of Earth’s magnetic fields, astronauts would become vulnerable to solar radiation and charged particles ejected from the sun. We have experienced cases in which circuits on deep space satellites were fried and rendered inoperable because solar flares destroyed them.

In the eventuality that Man takes another “small step” to the next planet in our solar system, we will have to protect our astronauts from solar flares. NASA’s plasma bubble is established by a wire frame network of charged plasma to induce a magnetic field around the ship. This design is similar to the one proposed here, except that my concept uses magnetic fields to conform a bubble of plasma in order to block phasers and torpedoes. While plasma shields are theoretically possible, we may not see brilliant space battles anytime soon. Nevertheless, NASA’s own inventions and efforts in the development of shield technology is very electrifying (excuse the pun), and this brings us one step closer to landing humans on another world for the very first time.