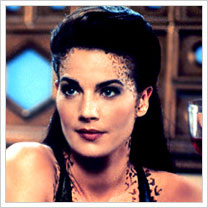 Terry Farrell, the actress who played Jadzia Dax for six seasons on Star Trek: Deep Space Nine sat down with StarTrek.com to discuss her time on the show. During the interview Farrell talks about her time playing Jadzia, what intrigued her about the character, being paired with Michael Dorn, Jadzia’s importance, and more.

Below is a sampling of that interview

DS9 was already in production when you won the role of Jadzia Dax. What do you remember of that period when you auditioned, auditioned some more, met the Paramount brass, got the role, had costume fittings and makeup tests, then had to get on the set and start filming?

Farrell: Oh my God, I was a nervous wreck. I was really excited. After everything I had to do to get the role, I was then stunned when I got there and saw how big the set was. If I remember right, I was thinking, “This is enormous. This is the biggest set I’ve ever been on.” I’m talking about the OPS set, and it was so intimidating and overwhelming, and I was already so overtired from all of the makeup tests and all of the excitement. I was so skinny then. I wasn’t eating as healthy as I should have. I know I was smoking then, so that wasn’t good. But I felt like I was under an enormous amount of pressure. If I remember, pretty much everything else had been shot and we had to shoot my stuff because I was the last person hired. Then they changed my makeup. I guess I had a forehead and they didn’t like how that looked. So Michael Westmore came up with the spots and took out the forehead. So we had to re-shoot. And, you know what, I’m just not a good sleep-deprived person. Seriously, when we had our first Christmas break, I don’t think I did anything for those two weeks. I just turned the TV on and I don’t remember doing anything but staring at the television set. It was awesome. I learned so much. But it was really like being thrown in the trenches. I wish I could go back and do it again now. Knowing what I know now, I think I’m far better prepared to play Dax, just as a woman, as a human being on the planet, being 47 years old. I think I’d do a far better job of playing Dax right now.

Once you settled in, how easily did you slip into Jadzia and what intrigued you most about the character?

Farrell: I think what interested me most was trying to find her strength. She wasn’t defensive at all; she was always calm and relaxed and confident. She had a peaceful, mature way about her. I think that’s what I held on to. I don’t think I really attained that for myself, without being Dax, until I had a child. But I think that playing her was actually my anchor to feeling safe in the world at that time. Playing Dax made me feel like I was secure and I was safe.

DS9 was so dark, but Jadzia was so hopeful and positive – without being in anyone’s face about it. How important a role did you feel the character played within the context of the show?

Farrell: Avery (Brooks) used to always tell me that I was too open and, honestly, I think that’s just a part of who I am. I think that’s part of what I bring to the picture. I have a lot of energy. It’s hard for me to hone it in and relax and be stabilized. So I think that constant energy flowing through her was just being optimistic. I played Mimi in Mimi & Me, and it was really off the wall. That’s just how I channeled me being Terry. I think that’s my personality coming through.

Now flip that. How important was it to you as an actor to have those moments on DS9 where we saw a more serious side of Jadzia? You had many episodes that involved darker moments, among them the Mirror Universe shows.

Farrell: Those I wish I could do again, the Mirror Universe episodes, because I didn’t quite trust that I was going to be OK. There was one show in particular (“You Are Cordially Invited”), which David Livingston directed. Worf (Michael Dorn) and Jadzia got married. David was really supportive and Michael and I and David all really worked together, and it was one of those magical shows to work on. Then we had the episode (“Change of Heart”) where Worf and I went on a trip and I almost died, and Worf had to make this decision whether to stay back and save me or go ahead with the mission. That was another one where I felt like we were all very connected. Those are a couple that stand out in this moment, talking to you. But a lot of them, especially in the first couple of years, I felt like I was a fish out of water. I didn’t feel comfortable. I was trying to figure out how this was working for me. I was still getting caught up in memorizing all my dialogue. I think it took a couple of years for me to feel like I was immersed in it and comfortable.

How did you and Michael Dorn react when the producers came to you and said, “We’re going to pair up Jadzia and Worf?”

Farrell: Oh, we’d thought we were so clever flirting with each so we’d have more stuff to do together, just because we were friends. Ha! You’d think they had that planned the whole time because it all just went so easily. And I loved it because Michael and I were such good friends. We could just hit heads and really talk things out. At the time it could be really irritating because we were so tired all the time. But taking that out of the equation, I learned so much from working with Michael, as a person and as a performer. He’s a very good friend. My husband reminds me of him in that they don’t say that “Enough is enough.” They’re just constantly picking at stuff. It’s like, “Enough already!” But it’s that need to make it perfect.