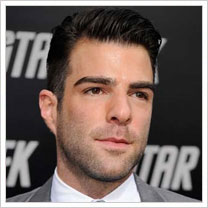 Zachary Quinto answered a few questions regarding the next Star Trek film, which is slated to begin shooting later this year, during a recent interview with io9.

While Quinto has yet to read a script for the film, he does speculate on where he believes both his character and the Spock-Uhura relationship may be headed. He also discusses repopulating the Vulcan race and what he’s excited for in the next film.

When asked about Spock’s journey in the next film, Quinto said “I wonder about that. I would imagine (this is just speculative), his planet’s been destroyed, he feels a real imperative to rebuild his race. But he’s in love with a human. There’s probably some potential conflict in that dynamic, I would not be surprised, and I would be intrigued and excited by that if that were the case. Again, I have such implicit trust in all of those guys: Damon, Bob and Alex, and J.J. I feel like they’re going to take us where we need to go. And we’re going to follow them whole-heartedly.”

“I don’t see how they could just drop it. It may be fraught, I don’t know!” Quinto said, when asked about the Spock-Uhura romance.

When asked about being one of the last Vulcans, Quinto said “He’s not the only Vulcan, I think I said, “Of my planet’s nearly 6 billion inhabitants, approximately 10,000 have survived.” He’s not the only one. But the odds aren’t great. He has a bit of a cultural imperative to [help].”

“He turned his back by choosing not to go to the Vulcan Science Academy, but his culture has always been a very important part of who he is. It’s an integral part of his internal fabric. I think if he’s wrestling with feelings of guilt for having sort of embraced his humanity, then an event like this is the great equalizer, it levels the playing field. I don’t think he’s going to spend too much time feeling guilty. I think he’s going to spend a lot more time doing the logical thing. Which is to help repopulate, help support, and help rebuild the race of people. His father was full full Vulcan, and he has a responsibility there, and he loves his father very much. I don’t think he’s that torn about it. I think he’s done the best he can to straddle a really complicated circumstance.”

“I’m interested to see what the villain situation is. What are we fighting against, what is our mission? That’s going to be really cool for me. I’m really excited to see the direction in which they take my character in general. I’m excited to see when this movie takes place, in juxtaposition to when we ended the first one. Where do we pick back up? What’s happened to the characters since then? My sense is what’s the dynamic like between Kirk and Spock? Is it all smooth sailing? I imagine that they’re both so strongly willed, that there will be some continued friction… I’m just excited to read it and shoot it.” he said, regarding what he’s excited to see in the sequel.