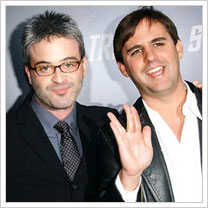 Star Trek 2 is still without an announced start-of-production date, a release date or even a confirmed title. However, co-writers and producers Alex Kutzman and Roberto Orci recently shed some light on their mindset going into the sequel and their thoughts on rushing the film to theaters.

“I’ve heard so many things mentioned, but we have so much… it’s a matter of someone putting the date on paper and saying, “We’re starting.”” Orci said.

Regarding rushing the film to theaters, Kurtzman said “You just don’t want to do that, especially on a movie that we all love so much and has high expectations.”

“Rushing means more expensive, and that’s a question for our benefactors, who have to decide how bad they want it in terms of that kind of stuff.” Orci said.

In this article:Alex Kurtzman, Roberto Orci, Star Trek Into Darkness