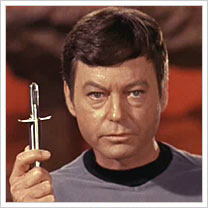 It is a major theme of science fiction that the doctors and physicians of the future use medical equipment that is much more advanced by today’s standards. A patient can walk into sickbay on the Enterprise with a broken bone and all Doctor McCoy has to do is give him a dose of some miracle drug to stop the pain, point a tiny laser at the injury to instantly reset the bone, and give him another dose of bad bedside manners to build character. One of the things commonly used in Star Trek is the hypospray. It is a device with the same function as hypodermic needles today save for one difference: the skin doesn’t get punctured with a sharp needle. This post will include a brief discussion on how a hypospray works theoretically and how practical its use is in the future. 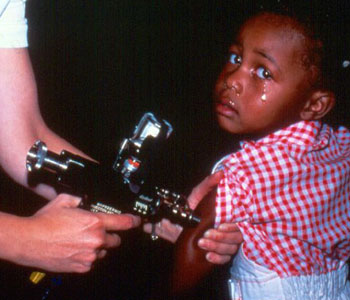 The concept of hyposprays in Star Trek originated from an invention in 1960 (six years before the debut of The Original Series). Aaron Ismach constructed and patented a device (named the “Ped-O-Jet”) with a serological syringe attached to a pump that forces liquid through tight openings in the skin. The original intent of this device was to aid the World Health Organization’s (WHO) mass-vaccination campaign to immunize whole populations against smallpox, an initiative that successfully eradicated the virus in the world. Eventually, companies and research institutions recognized the potential of using a multiuse, needle-less injector, so they began developing and mass producing their own versions of the Ped-O-Jet, later to be given the generic term: jet injector.

Jet injectors work by forcing fluids through pores in the skin to allow sera delivery. Pores are just small enough to prevent large particles from passively entering the skin but large enough to allow the passage of water, ions, and biomolecules (i.e. sweat), so porous injections are not only possible, they are ideal. Often, the serum particles are larger than the pores themselves, so a higher fluid pressure is required to force open the pores for an efficient delivery. Here’s a video of how a single-use hypospray works.

The design of the jet injector was originally bulky and difficult to use, though commercial applications today use a much simpler, cleaner apparatus. The most common means of jet injection is used to deliver insulin to treat diabetes, a very worthy advantage in lieu of painfully sharp needles. Another advantage to using jet injectors instead of hypodermic needles is that each syringe can be used multiple times for multiple individuals, whereas hypodermic needles must be discarded after every use to prevent cross contamination. This absolves the consumer of fees required to dispose of hazardous waste.

Pharmaceutical companies have already developed and patented several injector models and are FDA approved for clinical use while others are still in Phase I and Phase II trials for safety and effectiveness. One of the greatest accomplishments in medical science was the eradication of smallpox, and that would not have been practical without the application of jet injectors. Hyposprays, or jet injectors, whatever you want to call them, are indeed Science Facts.

One thing to note about hyposprays is that their use on Star Trek is entirely unrealistic compared to how they were meant to be used. First, patients receiving a hypospray injection in sickbay react to it as though there was no pain. Surely, the hypospray would be painless, but not comfortable; more on that below.

Secondly, Julian Bashir, Beverly Crusher, the EMH, and even Leonard McCoy are all guilty of improperly using the hypospray. On several occasions, they have injected their patients through their clothes. It’s meant to be in contact with the skin, otherwise the fluids won’t penetrate the pores; either they failed a few classes on first aid or they bought their medical degrees from a Ferengi.

And need I mention the blood screenings on Deep Space Nine? Perhaps I should. The hypospray is a one-way delivery mechanism; it forces fluids through the pores and into the epidermis where it passively diffuses into the bloodstream a few millimeters below the skin. If a doctor were to reverse the injection to use a high-powered vacuum to draw blood out of the skin, the hypospray would sheer the skin apart and cause the blood vessels to burst. Benjamin Sisko would be writhing on the ground from pain and agony if Dr. Bashir did that to him.

In addition to its benefits, there are limitations and side effects to jet injectors that have, on occasion, prompted the FDA to regulate its use. Here’s a list of problems commonly associated with jet injectors:

Not painful, but still uncomfortable

While jet injectors avoid the painful prick of sharp needles, patients still claim it feels weird or uncomfortable. This is understandable considering that a high-pressure pump is used to “force” open skin pores. I don’t know about you, but that’s not a very pleasant sensation.

Patients who have used the jet injector multiple times have reported irritating skin lesions left by the injector. This is not surprising considering again that the jet injector is designed to forcibly open skin pores. It is only reasonable to expect skin irritations after applying it multiple times on the same area before it properly heals, so it isn’t so much an error in part of the injector but rather in the user. If there is one thing I hope the reader gains from reading this, it’s that when using a hypospray, DON’T use it on the same area of skin every time (and don’t go around performing blood screenings on potential Founders, it doesn’t work).

While one advantage of using jet injectors is the significant reduction in fees for proper disposal, jet injectors are still expensive. An average injector can cost anywhere between $400 and $600; in addition to purchasing one, the consumer also has to buy a nitrogen tank to charge the injector, which can amount to $160 for a 20-pound canister and $50 to refill it when the pressure drops. The machinations in the injector are very complex and often require special maintenance; repairing broken injectors are also costly. The jet injector is a highly regulated piece of hardware, so production costs often include taxes, making it more expensive for the average consumer. Another reason why hypodermic needles are preferable to jet injectors is the fact that needles are cheaper and easier to use.

Contrary to the claims of some developers that sharing jet injectors is safe, the FDA and WHO find that cross contamination can still be a consequence in sharing injectors. In 1985, there was an outbreak of hepatitis B related to a weight loss clinic in Brazil. According to a cohort study, the researchers (Canter, Mackey, and colleagues) identified the jet injectors as being the most probable source of the infection, mainly due to improperly sterilizing and reusing the same injector tips. After discontinuation of the jet injectors, the incidence of hepatitis B at this weight loss clinic dropped significantly. Canter, Mackey, and colleagues conclude that jet injectors still carry the risk of cross contamination. In other words, sharing jet injectors can be just as harmful as sharing needles.

Hyposprays are definitely possible in the future, but their widespread use may not be. They are expensive and the risk of inadvertently transmitting diseases severely limits multiple uses. However, this does not mean that hyposprays aren’t safe. In fact, companies are beginning to invest in the technology to make them more marketable; research and development will improve current designs so limitations today may be surpassed tomorrow, as all things usually are. I imagine a future where both hyposprays and hypodermic syringes have equal footing in clinical applications.