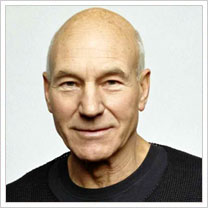 While Patrick Stewart has played several roles during his four-decade long acting career, it goes without saying that a large portion of fans will most-fondly remember him for his portrayal of two characters. The first, as Star Trek: The Next Generation‘s Captain Jean-Luc Picard. The second and more recently, as Professor Charles Xavier from the three original X-Men films.

During a recent interview, Stewart commented on whether he’s seen the new X-Men film, starring James McAvoy as a younger Charles Xavier.

“I haven’t seen it,” Stewart told MTV News during the interview. “I haven’t been to the movies in over nine months. Believe me, and no one will believe this, especially I think James [McAvoy], there’s nothing personal about this.”

“This is because I’ve been in the theater working all the time,” he went on to say, “I’m not able to see movies.” said Stewart.

Poking some fun at his friend William Shatner, Stewart said “[I’m] unlike my dear friend Bill Shatner, who always made a point of saying he had never seen The Next Generation,” he joked, “you know like, “why would I waste my time?'”

In this article:Patrick Stewart, William Shatner