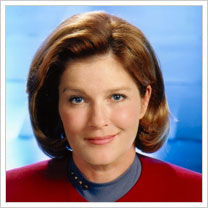 Kate Mulgrew who played Captain Kathryn Janeway on Star Trek: Voyager is the only actress to portray a female captain in a leading role in the history of the franchise. Mulgrew talked up Trek’s 45th anniversary, the love for Janeway and her new Adult Swim project, during a recent interview.

While discussing her best experience with Star Trek fans, Mulgrew said “I got seriously involved in Alzheimer’s causes after my mother’s death many years ago. I met a young woman from the Isle of Jersey. She raised almost $25,000 to that cause to fly out to New York City to have lunch with me. That supersedes allegiance or fandom, and goes somewhere else. I see such generosity of spirit with the fans, and it’s because they loved whatever character they loved, whether it’s Captain Janeway or someone else.”

“I’m attending nothing but conventions for the next six weeks, all over the world. I go to Vegas and Australia and Germany and Prague and Atlanta. I’m everywhere! It’s still hard to believe it’s been 15 years since Voyager and 45 since the whole thing began.” Mulgrew answered to how she plans to celebrate Star Trek‘s 45th anniversary.

Switching topics to her new show NTSF: SD: SUV on Cartoon Network’s Adult Swim — Mulgrew discussed what attracted her to the role of Kove saying “Madness. Sheer madness! I lost my mind and found myself with a bunch of other people who lost their minds together! Paul Scheer was astute enough to sense that at this point in my life, I needed a departure and I needed to laugh. So he called me up and he said, “Will you play the head of this strike force?” And I said, “Sure!” He said, “You have to wear an eye patch and you’re obsessed with sex and we’ve been married and divorced twice, and we have two little kids and they don’t talk.” I said, “You’re on!” I went to work for four weeks, maybe it was five, and all I did was laugh. All day and all night long. I think he’s a bit of a genius, Paul Scheer. Comedians of his stripe are really smart guys.”

Watch a preview of NTSF: SD: SUV embedded below:

You can read the interview in it’s entirety over at Mania.com.