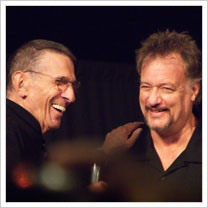 The project, originally launched in 1996, was born from Nimoy’s desire to “branch out” and work independently of Trek and de Lancie’s affinity for the works of H.G. Wells, Jules Verne and similar authors of science fiction genre, whose works they use as a basis for their dramatizations.

LOS ANGELES, CA (August 11, 2011) – Leonard Nimoy and John de Lancie announced today they are re-releasing all five of their original Alien Voices® Audio Dramas as digital downloads. These previously out-of-print titles include “The First Men In The Moon”, “Journey To The Center Of The Earth”, “The Invisible Man”, “The Lost World” and “The Time Machine”.

Each title is available for download from the Alien Voices® web site for $9.99 each:www.alienvoices.net

“After years of being associated with other people’s projects we wanted to enter the nest century at the helm of our own,” said Leonard Nimoy, best known for his portrayal of Star Trek’s Mr. Spock. “ALIEN VOICES gives us the chance to work with other artists who also want to branch out, yet still provide audiences with the quality they’ve come to expect from us.”

John de Lancie, whose recurring role as “Q” in Star Trek: The Next Generation and Star Trek: Voyager made him the series’ most popular guest star, explained, “I was raised on the classics – Jules Verne, H.G. Wells and others. Now we can bring these to even wider audiences by means of new technologies and old friends. We at Alien Voices feel that the dramatization should remain faithful to the original works. We are presenting Verne, Wells and other giants of the science fiction genre as they, themselves, might have wished to be heard.”

Alien Voices can be found on the World Wide Web at: www.alienvoices.net