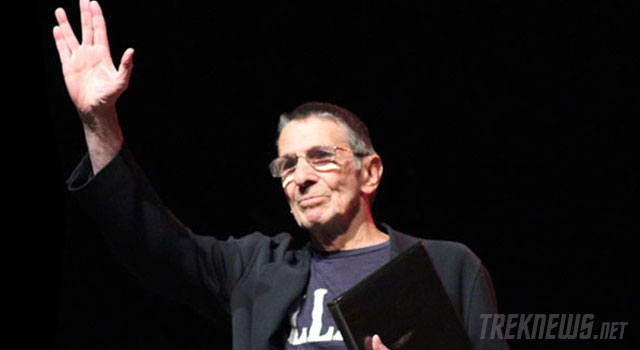 LAS VEGAS — Leonard Nimoy made his final west coast convention appearance on Saturday at the Official Star Trek Convention in Las Vegas. Nimoy, who announed he would be retiring from such events earlier this year, was welcomed on stage at the Rio Hotel & Casino to enormous applause. The audience of over 4,000 Star Trek fans listened intently as he stood at a podium and walked them through his life and career with the help of photographs, poems and thoughtful anecdotes.

Nimoy talked about growing up in Boston and moving to Hollywood in the 1950s to pursue his dream of acting. He told a story about driving a young John F. Kennedy in a cab and discussed some of his earliest acting jobs, including several westerns and The Twilight Zone. He went on to talk about filming the original Star Trek pilot “The Cage” and how he grew along with the franchise from the 1960’s to present day.

He discussed the Jewish origins of the Vulcan hand sign and fondly remembered his two fallen friends and castmates DeForest Kelley and James Doohan.

With tears in his eyes and voice cracking, a truly memorable and touching moment occured as Nimoy concluded the heartfelt overview of his life with the words “live long and prosper”. At that time, the pure emotion and magnitude of the moment seemed to wash over the rows and rows of fans as they came to their feet for a standing ovation.

I spoke with several fans immediately after — Many of whom told me it was a moment they will carry with them for the rest of their lives.

Mr. Nimoy has just one convention appearance left as he’ll be the featured guest at Creation Entertainments’s next Star Trek Convention in Chicago on October 2nd.