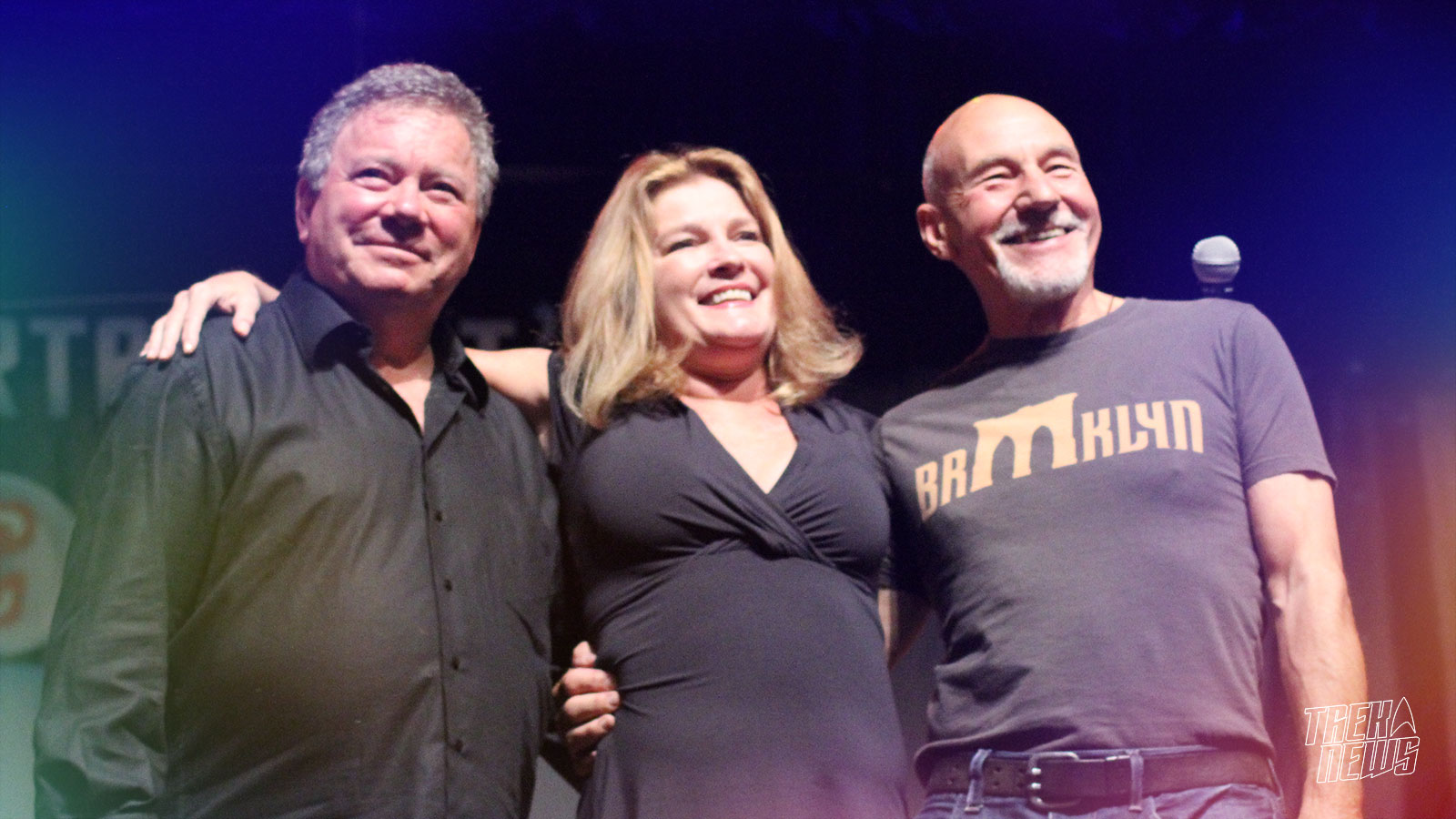 Sunday was the fourth and final day of the Star Trek Las Vegas 2011. Three of Star Trek’s captains; William Shatner, Patrick Stewart and Kate Mulgrew all appeared on stage together. Additionally, George Takei, John Cho, Nichelle Nichols, Grace Lee Whitney, James Darren and several other guests appeared in front of the record-setting crowd in the convention hall of the Rio Hotel & Casino.

Read our live report below.

Grace Lee Whitney, who play Janice Rand in The Original Series kicked off the day’s panels as Creation Entertainment co-founder Adam Malin discussed her career, life and Star Trek with her on stage. While talking about the way she played the Janice Rand character, Whitney said “Gene [Roddenberry] explained to me that she was fresh out of [Starfleet] Academy and in love with the captain,” adding “but he was in love with the ship,” she said.

James Darren, who had performed live for the crowd the prior evening, was up next. Darren discussed both his music and television career as well as his time on Deep Space Nine. During the fan Q&A portion, he was asked if Vic Fontaine was given a love interest on the show, who would he prefer it be. To which Darren quipped “There were so many beautiful women on the show,” adding “so I want it to be a ménage à trios.”

Robin Curtis was up next. Curtis talked about appearing in The Search for Spock and The Voyage Home as Saavik along with a few guest appearances on TNG as Talera.

Patrick Stewart was welcomed on stage to thunderous applause. Stewart mentioned he felt foolish after realizing he was wearing the same shirt and pants he wore on stage last year. During the Q&A none other than Brent Spiner took the mic to ask a few questions of Sir Patrick. Soon after, Kate Mulgrew and William Shatner joined Stewart on stage to discuss their time as captains on their respective films and television shows. Stewart had to depart prematurely to catch a flight, leaving Shatner and Mulgrew together on stage.

While on stage, Shatner looked out into the crowd of close to 5,000 fans and said “This is the biggest crowd I have seen, possibly ever,” with amazement. “And the best.” Mulgrew added.

As Kate left the stage, Shatner talked about playing Captain Kirk through the years and said that he always played him with “awe and wonder”. He went on to discuss his recent documentary The Captains and talked a bout his new television project Fan Addicts, which he appeared to be very excited about. He talked about some of the great footage he captured throughout the weekend as he attempted to “blend in” with the Star Trek fans.

He announced fans could log on to Fan Mosaics on September 8 to upload their photo in celebration of Star Trek‘s 45th anniversary.

The “Sulu Summit” was next. Voyager’s Garrett Wang come on stage to welcome out George Takei and John Cho. After posing for fan photos, the two Hikaru Sulu’s sat down to discuss their connection to the character and their respect for each other.

Cho talked about the current status of the next JJ Abram’s Star Trek film, saying he has yet to see a script, but he’s certain he’ll be receiving one soon.

David Warner made his first Creation convention appearance next. The actor discussed working on Star Trek V and VI.

The ever-beautiful Nichelle Nichols was this year’s final guest on the main stage. During her 45 minutes on stage, the former Uhura discussed her time with the Star Trek franchise. “Gene Roddenberry changed the world,” she told the fans as she talked about the the impact Star Trek has had on the world.

Creation has a three year deal with the Rio, which will keep the convention at that location through at least 2013.

TrekNews.net was told by Creation co-owner Gary Berman that attendance was up nearly 25% from the previous year at the former host hotel, the Las Vegas Hilton.

Almost every attendee we spoke with was happy about the location change and enjoyed the options the Rio provided.

Our coverage from Thursday, Friday and Saturday is also available, as well as the Guinness World Record for costumed Star Trek fans and Leonard Nimoy’s farewell.

Stay tuned to TrekNews.net for all the latest Star Trek news.