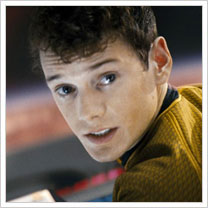 Anton Yelchin, who took over the role of Pavel Chekov for JJ Abrams’ 2009 Star Trek film, discussed his portrayal of the character, receiving Walter Koenig’s blessing, his reaction to the film along with his anticipation of the sequel, in a recent interview with StarTrek.com.

Walter Koenig, as we know played Pavel Chekov in the second and third seasons of Star Trek along with the original films. On the topic of receiving Koenig’s blessing, Yelchin said “Oh, that was huge. When you’re taking on something that’s been made iconic by an individual, and for so many years, there’s always that sort of desire, I guess in some selfish way, to gain their approval.”

“It would suck if he came up to me and was like, “I f–king hate you. That was terrible, and I don’t like you.” That’d be awful. But I’m so glad that he liked the work that I did, and to meet him was really great. It was really a very important thing for me.” he added.

The highly-anticipated sequel and his character were the next topics of discussion.

“I trust the people that are writing it.” Yelchin said. “They wrote a good film and a good character the first time around, and I enjoyed doing that. So I trust that they’ll find some mission for me to do in the next one” he added.

“I’m ready. It’s been a while, but whenever they let me know, I’ll be there.” an excited Yelchin remarked.

The entire two-part interview is available at StarTrek.com.