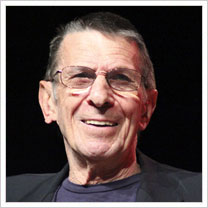 Leonard Nimoy took the stage for what many believe to be his final west coast convention appearance this past Saturday in Las Vegas. Nimoy discussed his career in television, film, Star Trek, along with his friends, his passions and his life.

As his presentation came to an end, he raised the Vulcan salute and wished everyone to “Live Long and Prosper,” as he bid farewell to the audience of more than 4,000 fans.

Since announcing his plans to retire from convention appearances earlier this year, Leonard Nimoy has been a hot topic of conversation. With the big Vegas con now in the rearview mirror, just one appearance remains — Creation’s Official Star Trek Convention in Chicago, where Nimoy will be teaching his photography seminar Saturday, October 1st and will make his final on stage convention appearance on Sunday, October 2nd.

Today we ask you if you think he’ll reemerge on the convention scene.

Vote below and leave you thoughts in the comments area.