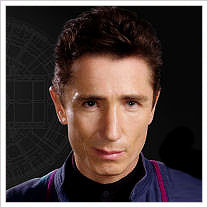 Dominic Keating played Lt. Malcolm Reed for four years on on Star Trek: Enterprise. In the following interview Keating looks back on the casting process for the show, his dealings with Brannon Braga and Rick Berman, and it’s untimely cancellation in 2005.

“I remember getting a call from my manager who said, ‘I’ve booked you an audition for a series regular on the new Star Trek show.’ He then read me the character breakdown for Malcolm Reed, who was a girl-shy, by the book, button-down Englishman. Keep in mind that right before this I had played a maverick devil in The Immortal and then a bisexual ghost in a film for the Showtime cable network. After roles like those I had a hard time ‘feeling’ the part of Reed, if you know what I mean.” Keating said.

“That night I put together this Star Trek-ish outfit to wear for the audition. I got a pair of these molded black funky space-looking shoes that were all the rage, along with some black pants and a black V-neck with a white T-shirt underneath. Then I swept my hair back, which, luckily for me, had just grown out enough after being cut bisexually short and spiky,” he quips. “The next day I met with Rick Berman and Brannon Braga [Enterprise co-creators/executive producers] and things went swimmingly. However, two or three days passed and I didn’t hear anything.”

“Finally, my manager rang up and said, ‘Good news, the Enterprise producers think you’re great!’ So I went back to read for James Conway, who directed the pilot episode ‘Broken Bow,’ and then for the executives at Paramount Studios. John Billingsley [Dr. Phlox] was there, too. Apparently, we were the first two cast members to audition for the network. Later, John and I sat waiting in the hallway until Rick came out of the office. He looked at the both of us and asked, ‘So are you ready for the next seven years?’ and then walked off. We were dumbfounded. When we finally came out of our stupor we realized what had happened. Talk about a good feeling.”

“I also come from the boarding school or public educational system in England where discipline, order and a certain degree of toughness were the order of the day. When playing Malcolm I tried to think back to the feeling of my old school days, especially as they are so far removed from my life as it is today. I’m happy to say it seemed to work.”

“I wanted to show fans that there was a living, breathing person underneath that Starfleet uniform who was capable of being among other things, charming and funny. Little by little, the character took on a life of his own. He became me and I became him and somewhere in the middle you met Malcolm Reed.” Keating says.

Star Trek: Enterprise was cancelled after four seasons. The final episode “These Are the Voyages…” aired on UPN on May 13, 2005.

“We shot our last scene in engineering on a Friday night,” says Keating. “It was Connor Trinneer [Commander Charles “Trip” Tucker III] and me, and it was quite wonderful, really,” he says. “I think it’s one of those moments that fans will play back over and over in their heads. Basically it’s a thinly disguised and very moving allegorical scene for the end of our stint on Enterprise as both characters on the ship and actors on a TV show. There were a couple of times that night where I welled up; that Friday it really hit home for all of us that this was it.”