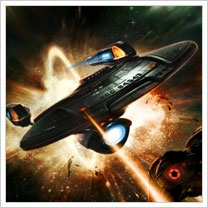 Even with the smash hit that was JJ Abrams’ 2009 Star Trek reboot and a sequel on the horizon, fans continue to clamor for Star Trek to return in its original form — on the small screen. In recent months reports and rumors have circulated with news of Jonathan Frakes, William Shatner and even director Bryan Singer pitching a new Star Trek television series. While most of these rumors have been shot down and regarded is little more than a pipe dream, none have been as fully developed as the latest addition by David Foster.

Foster, who recently spoke with Deep Space Nine writer Jack Treviño for TrekWeb, said his concept for a new show has been in development for years.

“I have to be very careful with the information that is released on this proposed Star Trek series, as we are still working with several people that can hopefully make this happen.” said Foster, on the topic of the new series.

Last May, we reported on an interview in which Jonathan Frakes mentioned he had been involved with a new Star Trek TV project. Since then, it’s come to light that while Frakes did not pitch the show to Paramount, he was however attached to it for a time.

“The original interview with Frakes was somewhat inaccurate. In it, he had actually said “I had a Star Trek project that was developed for TV…” Since then, several other media outlets have spun this in very wrong directions. Frakes did not develop the series, but was considering becoming attached to it. After being told that Brian Singer and William Shatner had pitches turned down by CBS (which has since been revealed to not be true in Singer’s case), Frakes decided to pass at that time, also noting his doubts that CBS would ever allow a television series to run simultaneous with the 3 contracted movies from J.J. Abrams.” said Foster.

“The fact remains that the height of the franchise came in the early to mid 90’s with the movies: The Undiscovered Country (1991), Generations (1994), and First Contact (1996), while the series: The Next Generation (1987-1994, and Deep Space Nine (1993-1999) were both on television. The lesson should be that good writing will always draw audiences like moths to a flame. We can only hope that the next flame is written with a vision and vigor that resembles that of the latest movie, while remaining accessible to the fans on a wider reaching outlet than the ill-fated UPN.”

Foster went on to discuss the series he developed along with Kevin Severson by saying “In 2006, Kevin Severson and I co-created our Trek series idea. It went through various stages of development over recent years. In September 2010, Kevin Severson died suddenly from a stroke. He left behind his wife and two children, his friends and family, and a dream that has yet to be fully realized, though Kevin was already living his dream during the development of this series.”

“The series concept is fully developed, subject to change of course, with a solid 5-7 year series plan, pilot script and a conceptualized finale that intends to define Star Trek for generations, extensive character bios, costume and ship/set designs, and more. This is a drastic departure from the typical 8-10 page treatment of the previously pitched Star Trek series ideas that have not included even a pilot script.” Foster remarked.

While JJ Abrams decided to go with an alternate timeline for his 2009 Star Trek film, Foster’s planned television project is quite different.

“The series is set in the post-Voyager era, and is designed to return Star Trek to its original series roots in big and mighty ways, without disregarding the other series and movies. As Star Trek (2009) was an alternate timeline, it will not conflict with any canon there either (Note: David does accept it as an “alternate canon”, if you will). The co-creators are avid believers in Gene Roddenberry’s ‘positive view of the future’ and intend to bring Star Trek back to its origins while moving forward with the timeline, integrating the best aspects of each of the previous series.” said Foster.

“The series is highly energized with a much younger cast, and uses cutting-edge future technologies with newly envisioned special effects and designs. It includes Klingons, Ferengi, Andorians, Vulcans, Trill, and many more. The Klingons are getting very restless since the Praxis incident forced them to come to the peace tables, and are tired of having to rely on the Federation for support. The Ferengi have discovered a vast new resource that has propelled them towards instant riches and power beyond anything they have previously experienced.”

“While all of the feedback and news has been completely positive and we continue to make great progress and garner support from key individuals, 1947 Entertainment has not yet, officially, pitched this to CBS.” Foster explained.

The project is currently listed as “in development” under the codename S.E.T.I. on David Foster’s 1947 Entertainment website. We’ll have more information on Star Trek‘s possible return to television, if details become available.

In this article:Jonathan Frakes, TV