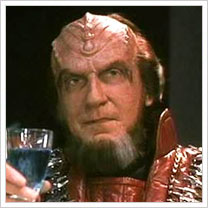 David Warner, who fans will remember as Ambassador St. John Talbot in Star Trek V: The Final Frontier, Chancellor Gorkon in Star Trek VI: The Undiscovered Country and the Cardassian Gul Madred in Star Trek: The Next Generation, recently made his first appearance at a Creation event two weeks ago at their Official Star Trek Convention in Las Vegas. During his time on stage, Warner discussed the various roles he’s played in Star Trek and throughout his career.

Warner recently sat down with StarTrek.com after the event to talk about his experience and further discuss his relationship with the Star Trek franchise.

“I’ve done some conventions in England. They weren’t Star Trek conventions, but I’ve done other conventions because of the stuff I’ve done, a lot of sci-fi and horror and whatever it is. And people dress up for those, as well. The ones I’ve gone to were not quite so big as this particular Star Trek convention is and most of the ones I’ve done were just signing and chatting to people. Here, I did a Q&A. But it’s not too strange for me. What’s interesting is people are bringing up things that I did 20, 25 years ago, so it’s not always easy to remember everything. I also make a practice of not seeing a lot of what I’ve done. That’s just one of those superstitions I have. I do a job and I don’t necessarily watch it, so sometimes it’s very hard to talk about it. Some things I may have just seen once. It’s not that I don’t like the work; I just don’t enjoy watching myself. So I talk about my memories of working on them.” Warner said, as he discussed the Las Vegas event where he appeared in from of thousands of fans.

He went on to talk about getting his first Star Trek role in The Final Frontier, which was directed by William Shatner.

“Someone said ‘Would you like to meet William Shatner.’ I said, ‘I’d be delighted.’ I went into an office and there he was. As far as I know they wanted me for it, instead of having me audition and screen test. The part itself was not all that huge. Actually, it was bigger than it turned out in the film, because they’d cut quite a bit out of it. So I was actually just standing around on the Enterprise bridge for the most of it. So that’s it, I was just offered the part. I’d just arrived and was living in Los Angeles, and I’ve been offered a job in Star Trek. ‘Thank you.'” 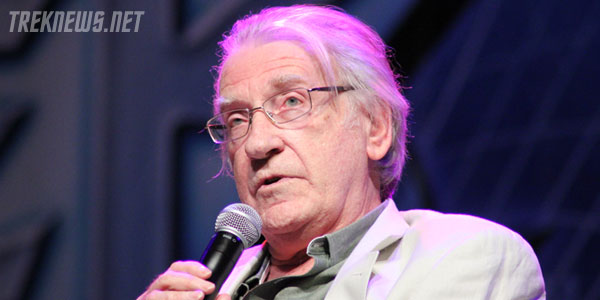 His role as Chancellor Gorkon in The Undiscovered Country is fondly remembered by Star Trek fans.

“I don’t know why I turned up in VI when I’d been in V, but I’d been a human in V and they had me be a Klingon. I read somewhere that everybody had forgotten that I was in V. So I was sort of invisible in V and they could cover me in makeup for VI. Plus, I’d done Time After Time with Nick Meyer.” said Warner.

“It was a three-hour job before I started acting to have the makeup put on. You see what you see as a member of the audience, but I don’t say, “Now, I’m the character.” I’m not that kind of actor.” Warner said regarding the Klingon makeup he wore in The Undiscovered Country.

Warner went on to discuss the makeup involved with his role as the Cardassian Gul Madred, in the TNG episode “Chain of Command” saying “It was another makeup job. It was with Pat Stewart, who’s an old colleague. It was great to be a part of that. I thought, ‘Oh, I’ve done two of the others, the old classic ones, and here I am in The Next Generation. I’ll go for it.’ So I wasn’t aware of it, of the Cardassians. I didn’t know there history at all, except of course, that they weren’t very nice.”