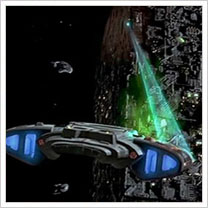 Whether employed to tow a shipment of grain to Sherman’s planet or to stop a fleeing enemy ship in the middle of space combat, tractor beams are a common technological theme of Star Trek.

Zero-point technology is one of the geekiest facets of science fiction to interest physicists ever since their initial conception; indeed, the ability to lasso an object from half a kilometer away using an invisible force field or energy stream interests even the least of science fiction enthusiasts. It is a featured characteristic of any advanced society we imagine would exist in the future, yet it is one of the most elusive pieces of technology one could ever conceive. In this post, science will determine just how plausible a tractor beam is.

The tractor beam is a force field emitter that directs hypothetical particles known as gravitons to tether objects and, given the right signals, could manipulate the motion of the objects. I don’t know how plausible this explanation is in science (mainly because we haven’t yet discovered gravitons), but it seems to work on Scrubs.

When I think of tractor beams, I imagine a projection of magnetic fields that attract nearby objects toward the source of the field. It’s simple enough that we could potentially apply it in the future to perform many tasks (tractor beams being one of them). What’s more is that magnetic fields are a much more realistic approach than trying to invent some new phenomenon of science fiction that mystically molds energy into an invisible lasso using a yet undiscovered particle of physics. I’m not saying that’s impossible, I’m just saying it isn’t realistic. Before we can get into the engineering concept of a tractor beam, let’s first go over the science of magnetism and why it’s applicable for all intents and purposes.

Magnetic fields are lines of force propagated by moving charged particles (i.e. electrons in atomic orbiatls). Largely, a material’s magnetic strength is determined almost exclusively by the magnetic spin states of their orbital electrons. Atoms and molecules with unpaired electrons are paramagnetic because an external magnetic field propagated against these atoms causes them to align electron orbitals with the field and be attracted to the magnet. Atoms and molecules with paired electrons are diamagnetic because fields propagated against these atoms cause them to orient themselves in such a way as to oppose the magnetic field and be repelled by it. This is because the magnetic force applied to one paired electron is cancelled out by an equal, yet opposite, magnetic force applied by the other electron. This will be important later on when we get into the actual tractor beam itself.

Materials with unpaired electrons in which the atoms are oriented in the same direction (that is their magnetic moments are all aligned without the intervention of any external magnetic fields) tend to form strong magnets; these magnets are termed ferromagnetic. Iron is one metal that conducts magnetic charge very well due to its atomic structure, and molding iron in a manner that aligns the magnetic moments of all the atoms in it is one way to make a strong, ferromagnet (like the common U-shaped magnet below). 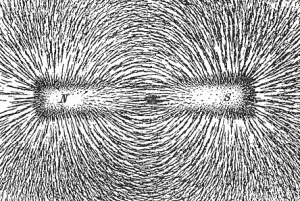 Believe it or not, I was stuck on this last step for the past several weeks. I couldn’t think of a way to realistically use magnetic fields in such a way as to tug ships, asteroids, and other massive objects because all magnets could possibly do were attract or repel, not tug. After thinking and sulking in the meantime, I gained inspiration from my old physics text book: a solenoid!

A solenoid is a metallic cylinder (usually with an empty, hollow interior, but an iron bar can be inserted to help conduct its magnetic charge) with a copper wire coiled around it a few hundred times. Applying an electric current through the copper wire establishes a magnetic field through the cylinder, and the field can be propagated in any direction for the purpose of attracting objects or repelling them. It all depends on the direction of the current through the wires and on the magnetic fields of the object in question.

Metallic and paramagnetic objects (like iron-nickel asteroids and other ships) can be pulled in toward the solenoid by mere virtue of the fact that they are attracted by magnetic fields. Diamagnetic objects (like comets) would be unaffected by any magnetic field. In any case, a very long solenoid with superconducting wires would be necessary to create a tractor beam-like device. A space ship with this kind of implementation could guide or attract (or even repel) metallic/paramagnetic/ferromagnetic objects through space. Though weak, solenoids could potentially set the framework for a working tractor beam in the future. Unfortunately, its limitations (see below) would make the design and implementation of solenoids as tractor beams hardly worthwhile. 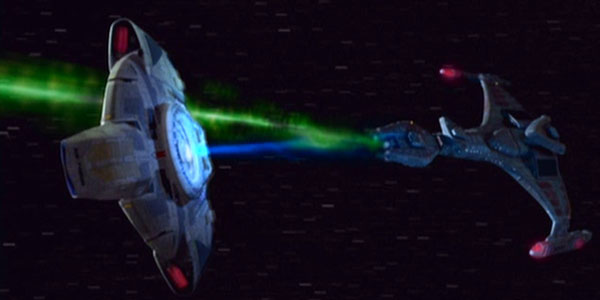 Tractor beams may not be entirely plausible (or even fulfill our greatest expectations if they are). Such a beam using electromagnetic designs (i.e. a solenoid) could be possible, but unfortunately I cannot say with any certainty that it will become that. As of yet, the tractor beam is still a facet of Science Fiction. Our magnetic solenoid is the closest we can get (probably ever get) to tractor beams, but with severe limitations and problems that may render it an impractical solution to zero-point technology (nothing is ever perfect).

For one, they are not actual tractor beams. The solenoid cannot simply tug on to an object and suspend it midair. In space, where gravity and air resistance are negligible, a solenoid would continue to pull objects in toward the tractoring ship even after the solenoid has been deactivated. A good workaround that I came up with would be to tug an object by initially using the solenoid, put it in motion, and then finally allow it move with you the entire way to your destination. The lack of air resistance in space can work in your favor because the vacuum of space does not impede the velocity of space ships, but sometimes, it can work against you.

Another limitation to using solenoids as a tractor beam is that when pushing objects away, the transmittance of momentum in a vacuum becomes an issue. Suppose a torpedo is on a collision course with the Enterprise and that Captain Kirk decided to use solenoids instead of tractor beams. Let’s next assume that torpedoes have magnetic fields. A magnetic solenoid can be applied against an incoming object such that the orientation of the magnetic field lines run anti-parallel to the magnetic field lines of the other object (in other words, the solenoid’s North Pole is facing the torpedoes North Pole). The opposition of the magnetic fields would repel the incoming object away from the Enterprise (given a sufficiently powerful solenoid and the right momentum), but there’s a catch. Due to Newton’s Third Law of Motion and the lack of air resistance, the force propagated against the torpedo would also be propagated against the Enterprise (every action has an equal, opposite reaction).

The momentum transferred against the other ship would be absorbed by the Enterprise as well, so the incoming torpedo would be repelled to an even lesser degree and may still be racing toward the Enterprise (it might not even slow it down if the object was more massive than the Enterprise). Luckily, since the Enterprise is pushed further away from the incoming object, it could work to Kirk’s advantage. A higher gain on the magnetic field would be required to effectively push objects away, but even that itself presents another severe limitation.

While torpedoes are much lighter than space vessels like the Enterprise, an anti-parallel, moderately-strong solenoid can still be a working solution to repel torpedoes, but what about much larger objects like asteroids or planetoids? Assuming they are diamagnetic and given a scenario in which an asteroid threatens a nearby planet, using a solenoid against these massive objects may very well push the Enterprise away from the asteroid at full force with little to no influence on the asteroid’s trajectory. Even worse, diamagnetic materials tend not to be influenced by magnetic fields because their electron orbitals reorient themselves to counteract any change in magnetic moments. No matter the strength of the magnetic field, a large, diamagnetic asteroid or comet inevitably spells doom for the Enterprise and whatever planet it threatens. It may actually work for iron-nickel asteroids (largely ferromagnetic), but a much, much, much higher gain on the solenoid is required to influence these massive objects

In 2010, a group of scientists at the Australian National University managed to create a tractor beam that was able to carry a few bits of glass midair across the length of an office desk. It works by using high-intensity lasers (termed “hollow lasers”) to heat up the air molecules around a narrow, cold center. Objects suspended in the colder region are repelled by the pressure surrounding the center and so they remain within this narrow band of cool air. A force applied on the object at this point allows it to move effortlessly through air without falling out of the tractor beam. Even if it falls or rises too close to the laser, the heated molecules bounce the object back into the colder region (like a ball bouncing against a wall). Prior to this paramount discovery, scientists had only been able to make oil droplets travel midair, riding a stream of light no longer than a few centimeters; this time, we were able to move glass particles 5 feet!

But like all things awesome in science, there is always a catch: it requires air. In order to create a pressure difference between the center and the space surrounding it to prevent the object from falling out if its tractor beam, air molecules must be able to get excited by the lasers and push against the air molecules inside the cold region. A tractor beam would work great in atmosphere, but in space it is no more elaborate than a simple laser shooting into the infinite expanse that is our Cosmos. Should a working tractor beam ever be developed for employment in space, it may not be this (or even solenoids). Until the next great physicist discovers gravitons or some similar particle of physics with the ability to suspend objects in space, we will have to make do without it.