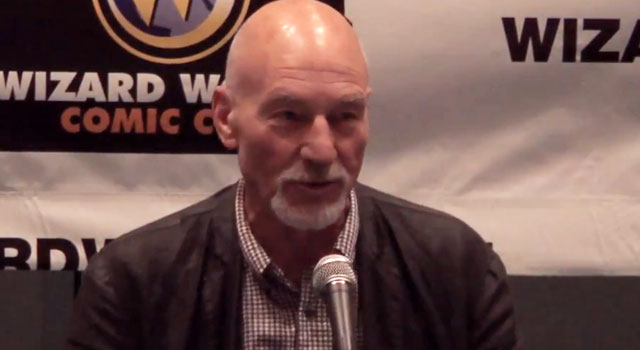 Sir Patrick Stewart was the guest of honor at this year’s Chicago Comic Con. During his panel, in which he appeared on stage with his son Daniel, he discussed his time on Star Trek: The Next Generation, his co-stars on the show, dancing and singing on the bridge of the Enterprise D, falling asleep while shooting an episode, filming Extras with Ricky Gervais and more.

This is the same convention where he “engaged” a couple at his autograph booth, which was also caught on video.

Stewart, who played Captain Jean-Luc Picard for seven seasons of TNG and four films, tells a story about being somewhat serious when initially filming the first two seasons of the show, saying for him it was “all about the work”. While Stewart attempted to take his work seriously he says some of his castmates “fooled around too much,”.

After calling a meeting to tell them they shouldn’t be fooling around, Stewart says Denise Crosby spoke up and said “but Patrick we need to have some fun” to which he replied “you are not here to have fun”.

Stewart credits the first two seasons of TNG as the time he realized both could be possible. “it was possible to work very hard, do the best work you could and to have fun,” said Stewart.

“They [his TNG castmates] gave me a sense of humor” Stewart admitted.

Watch the embedded videos below.

If for some reason you haven’t seen the “musical number” Stewart refers to in part 1, enjoy.