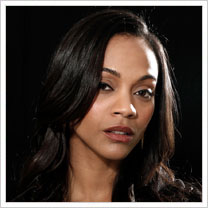 Zoe Saldana, who took over the role of Nyota Uhura from Nichelle Nichols for JJ Abrams’ 2009 Star Trek reboot and stars in last weekend’s #2 film in the US, Colombiana, recently discussed the ever-present issue of racism in Hollywood.

“I’ve witnessed racism all my life. And of course there’s racism and discrimination in Hollywood. You go for a part and they say, ‘Oh, we really liked her, she’s amazing, but we wanted to go with something more traditional’. As if I’m not a traditional American!” said Saldana.

“I feel sorry for people like that. They need to educate themselves. Mostly you move on and say, ‘Well, I wasn’t meant to work with you or be around someone like you’. Other times you might say, ‘You’re ignorant, you’re a racist. That’s it. I’m out of here!'” she continued.

“It’s trendy to hate Americans right now. Deep down, some people are enjoying the fact that the most powerful nation on Earth is struggling a little – and then they deny that’s racist! And that frightens me.” Saldana commented.