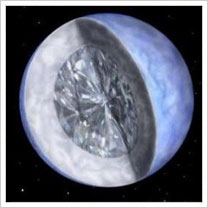 Last week brought news of an exciting new development in astronomy. Astrophysicists serendipitously discovered a planet one might find only in a science fiction show like Star Trek, but we now have evidence of an extraterrestrial planet made of diamonds. Yes, that’s right — a Ferengi’s dream come true.

From November 2008 to today, Bailes and colleagues have been conducting a pulsar survey using a radio telescope at the Swinburne University of Technology in Australia to identify, characterize, and document millisecond pulsars along the galactic disk. When their instruments measured a millisecond pulsar (PSR J1719-1438) about 4000 light-years away, they detected a companion “star” that appeared to be as massive as Jupiter yet had a density of around 23 g/mL (gas giants like Saturn and Jupiter have densities of 0.7 g/mL and 1.2 g/mL, respectively). The only known objects in the universe with a density close to 23 g/mL are ultra-low mass white dwarfs, but this object is even stranger than that.

This companion object doesn’t have as much mass to be considered a typical white dwarf, and spectroscopic analyses indicate that it mostly consists of carbon and helium, and perhaps trace amounts of heavier elements. Though carbon-helium white dwarfs are known to exist, this special object is more or less a planet than an average, everyday white dwarf, and its location orbiting around a pulsar makes it one of the most bizarre, yet fascinating, finds in astronomy since the initial discovery of pulsars themselves. Essentially, we have a highly dense astronomical object with a relatively cool core of crystalline carbon, and it is about the same size of Earth with the same mass as Jupiter; in other words: a planet that is very likely made of diamond. Here is a video that explains how the team made the discovery.

One of the most fascinating facets of pulsars is how they originate. Pulsars are formed from an accretion disk of hot, swirling gasses and stellar fragments left over from supernovae. The center of this accretion disk collapses under gravity, and if it is formed sufficiently close to a companion star, the accretion disk will actually leech stellar material from the companion star. 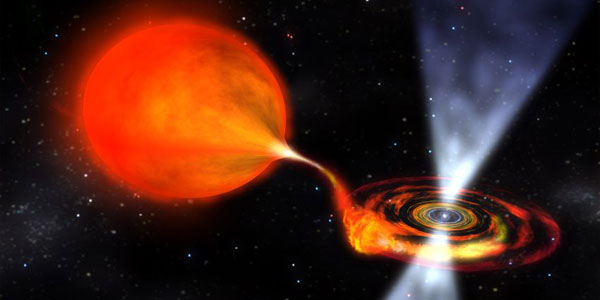 Once the object reaches critical mass, the intense gravity collapses the atoms inside the object down to their individual neutrons; the pressure of which is equivalent to taking the mass of the Earth hundreds of thousands of times over and crushing it down to the size of Manhattan Island. This object is considered a neutron star, one of the densest objects known to exist in the universe. If spinning sufficiently fast enough (about 100 – 200 rotations per second), neutron stars may emit radio waves (sometimes they emit x-rays) at either pole, at which point the neutron star becomes a pulsar. This is why astronomers, like Bailes and colleagues, use radio telescopes to detect radio wave emissions far out in space. If they aren’t looking for extraterrestrial civilizations, then they are looking for pulsars. Here is recording of the Vela pulsar radio signal, formed by the conglomeration of supernova stellar fragments; very eerie, yet absolutely sublime (well, mostly eerie).

But what is so important about discovering a diamond-like planet in space? What is its relevance to pulsars and neutron stars? Other than the fact that it is a very awesome find, the data collected by Bailes and colleagues offer us a very keen insight into the origin and evolution of binary star systems. In fact, this is direct evidence that shows us how physics works in terms of white dwarf and pulsar formations. We first discovered these objects forty years ago and they were a complete mystery to us then; now, science has provided us with a very good idea as to how they formed and what their significance is in the universe. We can account for the formation of pulsars in binary systems (like the one described in this diamond planet discovery), but solitary pulsars are still difficult to explain. They seem to form spontaneously without a companion star from which to leech extra matter. Several more years of research and exploring will answer today’s most ponderous questions. Nonetheless, the discovery of a pulsar-companion mostly made of diamond is certainly deserving of significant recognition.