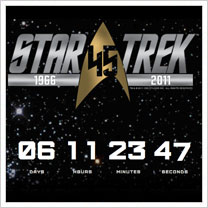 September 8th marks the 45th anniversary of Star Trek hitting the airwaves and to commemorate this momentous occasion fans can submit images to be a part of three official mosaics, which will portray Captain Kirk, the U.S.S. Enterprise, and Spock.

The mosaics will then be turned into limited edition prints by Fan Mosaics, which will be hosting the event. To be included in this historic compilation, fans must visit the website at midnight September 8th. Fans can choose whether to submit to one image or the Deluxe Edition Set, which includes all three. The price for doing so covers the image upload, the 24” by 36” mosaic print(s) of choice, and a numbered certificate of authenticity.

Thousands have already signed up for a reminder email from the site. So those who wish to participate should keep vigilant in order to be a part of Star Trek history.