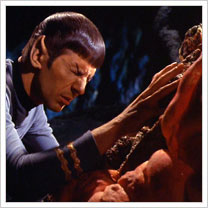 Previously, I posted a two-part article detailing the long, arduous process of abiogenesis as we understand it today, from the reduction of carbon, to the accumulation of bioorganic molecules, and finally to the generation of very simple organisms over the course of a billion years of torturous molecular evolution. Though that discussion was limited to the origin of life here on Earth, it considered the calculable probability of the origin of life similar to ours on other worlds with like characteristics (i.e. atmosphere, molecules, oceans). Even in the absence of absolute certainty, the emergence of carbon-, water-based life elsewhere in the Universe is most likely occurring on hundreds, if not thousands, of worlds. But what about the organisms showcased on Star Trek that appeared so different from us humans? Aliens that breathe toxic air? Aliens with a completely different genetic makeup than ours? Perhaps Q entities? Surely we cannot be so self-centered as to think that all life would look human, can we?

In this post, and in several weekly posts to follow, we will consider the scientific plausibility of the origin and evolution of life on worlds of which one can only imagine. The first topic of the week shall revolve around a very familiar, yet completely alien (excuse the pun), term of science fiction: silicon-based life.

Let’s first consider the scientific rationale for a living organism with silicon as its major elemental substituent.

Silicon is in the same group as carbon on the Periodic Table of Elements, which means essentially that both have the same number of outer shell valence electrons (four). In Layman’s terms, silicon and carbon share a similar electronic structure, one conducive to theoretically form similar molecular structures. 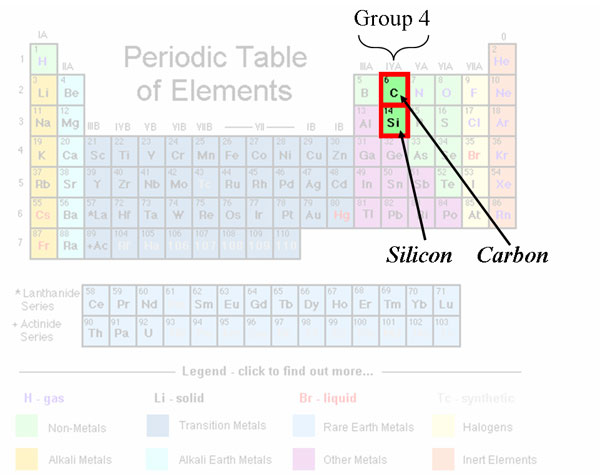 The science may get confusing here, but the point I wish to strike home is that the valence shell structure for both atoms are similar. If we know carbon-based life can emerge from a series of organic reactions over the course of millions of years in a precise order, then why can’t silicon, an element with an atomic makeup similar to carbon, yield the same results in a sufficient environment? Like carbon, silicon compounds tend to be self-replicating in nature, and can potentially carry some form of coded “information” the same way DNA does. Indeed, science fiction enthusiasts marvel at the remarkable ability of silicon-based compounds to carry similar properties, though not perfectly, as carbon. After all, we do have examples of silicon-based materials that share the same molecular motifs as common carbon compounds.

Methane is the simplest organic compound in the universe. It consists of a central carbon atom covalently bonded to four hydrogens. Silane is the silicon analogue of methane: a central silicon atom bonded to four hydrogen atoms (listed above as white spheres). Both compounds are flammable and they exist as gasses at room temperature. However, unlike methane, silane is highly unstable.

Methane spontaneously reacts with oxygen to form water and carbon dioxide, but the reaction is often very slow (air oxidation of methane can take several years); this is due to the fact that methane is a very stable molecule, so its activation energy is high. An ignition is required to combust methane and convert it completely into carbon dioxide.

Silane, on the other hand, is extremely unstable. It explodes when it comes into contact with air; no ignition is necessary. The big question remains: why is methane so stable, yet its silicon analogue is so unstable? The answer has to do with molecular bonding. The stability of molecular bonds is very important in terms of life.

Here is a video of a reaction mixture that releases silane gas. Almost as soon as the gas is produced, silane explodes in contact with air.

From the Periodic Table above, carbon is found in the 2nd period, while silicon is just underneath it in the 3rd period. This means, that silicon has a higher electron shell, making it a much larger atom than carbon (as you can tell by the side-by-side comparisons between methane and silane above). The atomic size of carbon is just small enough to strengthen electron orbital interactions (hence, the reason why methane is so stable), but silicon is too large of an atom to stabilize bonding with hydrogen. Si-H bonds are very weak, and so they break spontaneously in the presence of any mild oxidizer, even weak ones like oxygen.

Furthermore, carbon’s atomic size is small enough to allow p-orbitals and s-orbitals to overlap, forming a very diverse combination of covalent bonds (i.e. single, double, triple bonds with hydrogen, nitrogen, oxygen, halogens, and other carbons, though carbon only forms single bonds with hydrogen). This is why a whole branch of chemistry, namely organic chemistry, is dedicated to the study and theory of carbon-based molecules. There are literally millions of different molecular arrangements for carbon-based compounds, which is why a billion years of trial and error by nature opted for self-sufficient, self-replicating carbon compounds as the building blocks of life: many different combinations means higher adaptability and variability at the molecular level.

Silicon is no where near as robust as carbon in terms of forming diverse arrays of molecules; it is mainly limited to single bonds because double and triple bonds are too weak. This presents a serious problem in terms of the emergence of silicon-based life: if silicon bonding is too unstable and limited to just a few molecular patterns, how could they possibly permit the emergence of adaptable silicon-based life? It gets worse…

Silicon’s covalent bonds are more ordered than carbon’s. That does not bode well for abiogenesis. Silicon is an atom that tends to form network covalent structures. Chemical bond energies with oxygen, for example, are simply too high to maintain silicon dioxide in the free form, so they tend to crystallize and form highly ordered structures (i.e. crystals, not membranes or polymers) in order to stabilize the molecular interactions between silicon and oxygen. In fact, crystallization of silicates strengthens these molecules so well that they become very resistant to breakdown, and living organisms require degradable compounds to support their energy demands (i.e. digesting proteins and carbohydrates from food to supply cells with energy). If silicon compounds are very hard to breakdown for energy utilization, then how could life possibly thrive off of it?

Take for example the silicon analogue of carbon dioxide. Silicon dioxide is nothing like carbon dioxide in terms of molecular structure and reactivity. It is essentially sand. When heated under intense pressures, silicon dioxide becomes glass, but other than that, little else can be formed under spontaneous conditions. Silicon-oxygen bonds are typically the most stable chemical bonds with silicon. They tend to form granules of sand that are insoluble in water (and water solubility is absolutely essential for organic compounds to promote the emergence of living organisms). Silicates could come in a variety of crystalline arrangements (i.e. hexagonal, cubic, rhombohedral, etc.), but they are only minutely different from one another in terms of molecular structure, and on the whole they tend only to form crystals and rocks, nothing complex, varied, or diverse as bioorganic compounds.

Biologically important organic compounds are typically amino acids, lipids, DNA, RNA, cholesterol, urea, sugars, benzene rings, hydrocarbons, and even more than I could possibly list in this post, and each classification of bioorganic compound has many more different arrangements and molecular combinations, so the possibilities for life are endless with carbon. But silicon couldn’t possibly be an elemental conduit through which life is able to blossom from lifelessness. Unfortunately, I have to remain skeptical and say that silicon-based life is very much Science Fiction. We have yet to discover silicon-based life, and until we do, it remains an improbability. Though I do stress that, as part of my scientific conservativism, just because silicon-based life is improbable, it isn’t impossible. 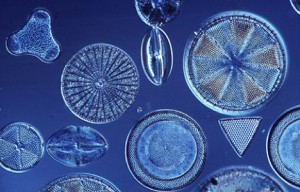 A microscopic view of diatoms. They are highly adaptable and versatile; diatoms can thrive in any body of water or wet soil.

There is an example of living organisms having evolved on Earth which have assimilated silica (silicon-based crystals) as part of their own biochemistry. Namely, these organisms, known as diatoms, utilize silica as part of their protective cell wall. They are microscopic and they tend to utilize food and energy in a similar fashion as cyanobacteria do, though they are not classified as bacterial; they are algae. Diatoms evolved from an adaptation to incorporate sand silicates as part of their cytoskeleton to protect themselves from environmental hazards. Over the course of millions of years, diatoms developed a biological function to synthesize silica from cellular reactions. In other words, they aren’t just harvesting silicon from the environment, they are actually processing it! Though bear in mind: diatoms are not silicon-based; they just happen to use silicon. This isn’t absolute proof that silicon-based organisms can thrive, let alone evolve, but it at least shows silicon can, more or less, have a biological basis.

On worlds with an abundance of silicates and organic compounds, I wouldn’t be surprised if organisms evolved to utilize silicon-based compounds for some chemical or survival purpose, but in the end, their actual cellular and body chemistry would very likely be carbon-based in origin.