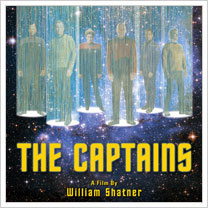 One week prior to the release of his new album Seeking Major Tom, William Shatner’s highly-rated documentary The Captains will be released on DVD on October 4.

The single disc DVD release will feature the entire two-hour documentary, which premiered earlier this summer on EPIX. The film stars William Shatner as he visits with and reflect on the careers of other Star Trek captains; Patrick Stewart, Kate Mulgrew, Avery Brooks, Scott Bakula and Chris Pine.

Since first soaring onto television screens in the mid 1960s, Star Trek has become one of the most beloved franchises of all time. The original Captain Kirk, William Shatner, travels around the globe to interview the elite group of actors who have portrayed the role of Enterprise Captain, giving fans an exclusive behind-the-scenes look at the pop culture phenomenon. Featuring in-depth interviews and vintage Star Trek footage with William Shatner, Patrick Stewart, Scott Bakula, Chris Pine, Avery Brooks and more.