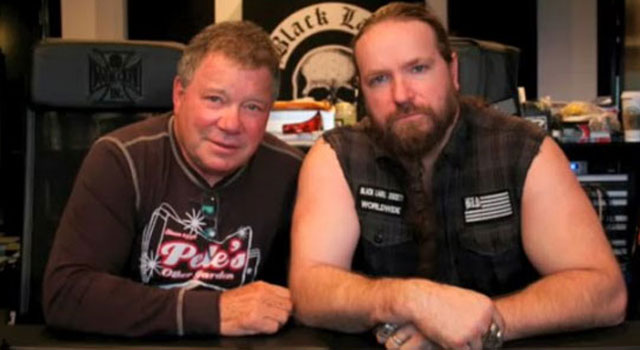 The album features several high level guest appearances from members of the heavy metal world, including Zakk Wylde from Black Label Society and Ozzy Osbourne, Ian Paice and Ritchie Blackmore from Deep Purple, Carmine Appice from Ozzy Osbourne, Mike Inez from Alice in Chains and Michael Schenker from The Scorpions.

Shatner discussed working with them, saying “It’s staggering, because half of them, so I’m told, sought us out, and the other half jumped at the chance! So we have twenty of some of the greatest musicians alive. The accumulation of talent on this album is phenomenal — I’m bowled over!”

“A lot of these artists just laid it down on the track and sent it in,” he said, “but in Zakk Wylde’s case I was there, and I watched a virtuoso musician, and how he works. I’d laid down my vocal with [producer] Adam Hamilton in his studio prior to Zakk, then we went up to Zakk and heard what he was doing, and I realized that what I had done was totally inadequate. I did my bit, but it didn’t have any deep understanding of what he was going to do. So after his vocal, I had to go back to the studio and lay down the track again!”

“As I began to listen with enthusiasm to rock ‘n’ roll, this sound called ‘heavy metal’ began to intrude, and the thought was, ‘this is the next level of dissent.’ And now, having done some of the heavy metal songs, I realize what it’s all about, which is the energy, the passion, and I’m slowly evolving my musical taste, as a result of the work I’m doing.” Shatner said of his first venture into the world of heavy metal.

The album is scheduled to be released on October 11 on Cleopatra Records.

Listen to Shatner’s rendition of Black Sabbath’s “Iron Man” below.

Watch Shatner and Zakk Wylde in the studio recording “Iron Man” below.