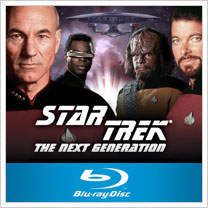 A report over at Digital Bits suggests that Star Trek: The Next Generation – Remastered sampler disc on Blu-Ray could officially be announced by CBS on September 28th. That date may ring a bell, as it marks the 24th anniversary of TNG’s first episode “Encounter at Farpoint” airing back in 1987.

While the street date for the disc hitting store shelves is still unconfirmed, the report goes on to say that December 6th has been mentioned as a possible release date. This would make sense for CBS to get the disc in-stores prior to the holidays.

As we’ve reported earlier, the rumored list of episode for the Blu-ray release includes “Encounter at Farpoint” parts 1 and 2, “The Inner Light”, and “Sins of the Father”.

We’ll have more information regarding TNG’s future on Blu-Ray as news becomes available.