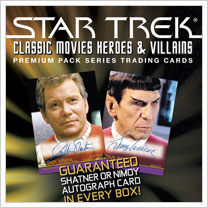 Star Trek trading card collectors are used to a traditional delivery system where a box of Rittenhouse Archives Star Trek cards are purchased for about $70 to $80 and contain many packs comprising a complete set of regular cards, a guaranteed amount of autograph cards, and some assorted chase cards. However, the Star Trek Movies: Heroes and Villains Premium Packs are geared towards the hardcore collector.

For $50 per pack (not box) and $750 per box (containing 15 packs), fans get some of the most pricey cards in Star Trek merchandising history. Each pack of 9 premium cards includes 2 random autograph cards guaranteed, 5 hi-res, numbered Heroes and Villain cards, 1 tribute card, and 1 die cut gold plaque Hero card.

Autographs include William Shatner, Leonard Nimoy, Brent Spiner, and Christian Slater among others. If a box is ordered, fans also get the guarantee of 1 Shatner or 1 Nimoy autographed cards. While expensive and not for the casual card collector, considering that two autograph cards are included in each pack helps sooth the sticker shock for interested fans.

Luckily for most trading card collectors who do not have this kind of budget, Rittenhouse Archives is continuing to release the more traditional and less expensive formatted Trek cards. 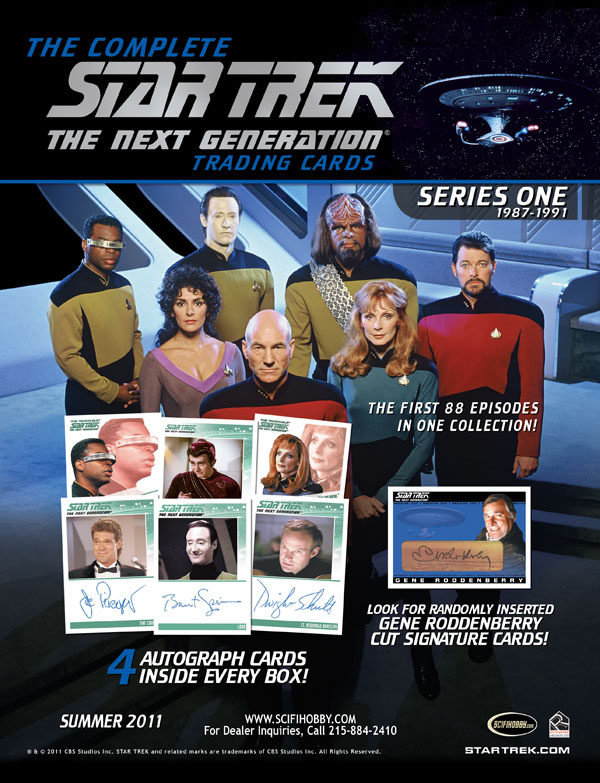 Now available is The Complete Star Trek: The Next Generation Trading Cards: Series 1 cards meant to commemorate the 25th Anniversary of TNG next year. For about $85, collectors get a box of cards that includes 4 autographed cards, a complete set of 90 base cards, and various chase cards.

As with all Rittenhouse Archive sets, there are also customized binders available for purchase that include a bonus card to hold the collection.

All items could be ordered from your local comic or hobby store, or directly from Rittenhouse Archives.