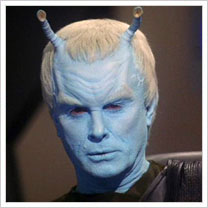 Previously, the science behind silicon-based life was determined to be science fiction. Silicon compounds are limited to invariable crystalline arrangements, while carbon compounds, namely organics, can form a large variety of molecules such that any stable molecular arrangement could be formed spontaneously and that natural selection would favor those molecules that support life. In the prebiotic competition between the silicon and carbon bases for life, carbon would most likely dominate. But consider the alternative where water was replaced by a very familiar, yet unlikely, chemical. Could life exist in a world dominated by oceans, lakes, and rivers of ammonia?

Ammonia is a toxic substance to humans, insects, even bacteria. It is the main ingredient in some industrial solvents and cleaning solutions and is hazardous to the environment. Ammonia is even an essential part of a recipe used to make high-yield explosives. How could something as lethal as ammonia possibly permit the emergence and evolution of living organisms? Believe it or not, ammonia has a lot of the same molecular properties as another familiar compound that is essential for life: water. Some astrobiologists propose that life may evolve in an ammoniated medium the same way life on Earth grew in a hydrated one. Imagine: the same substance that is known to dissolve metals, burn skin, pollute the environment, and blow up if mixed improperly may very well be the “Water of Life” on some extraterrestrial worlds (and I’m not talking about Dune).

Let’s first consider why ammonia is a potential candidate. Ammonia and water are both polar molecules. The electronegativities of the oxygen and nitrogen atoms are greater than the electronegativity of their hydrogen counterparts. The difference in electronegativity between the central atom (whether nitrogen or oxygen) and the hydrogen atoms causes the molecules to become polar. The central atom adopts a slightly negative charge and the hydrogens become slightly positive. This makes ammonia and water powerful solvents, as it can dissolve salts and small polar molecules. 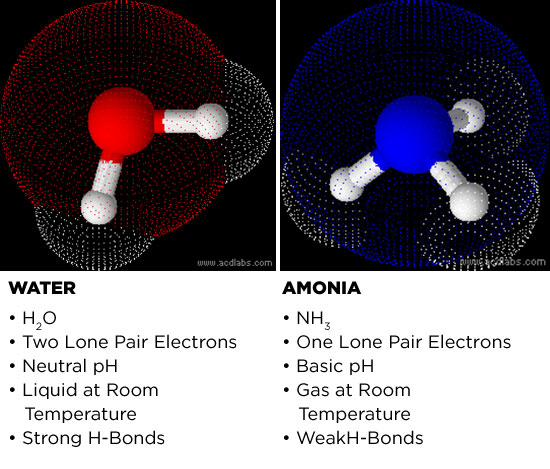 Several of the physical properties in water are also shared by ammonia. Both media can conduct electricity, though weakly, and the coordination of positively charged hydrogens with negatively charged parts on nearby molecules forms one of the strongest intermolecular forces known in chemistry: the hydrogen bond. This is analogous to taking an object with a positive charge at one end and electrostatically binding it to a negative charge on another object. In Layman’s terms, hydrogen bonds allow polar molecules to stick to each other very well, hence the reason why water has such a high surface tension and boiling point.

To that extent, water is a versatile solvent: it can dissolve almost “anything,” and solubility is essential under prebiotic conditions. It can dissolve many salts and small, polar organic molecules like sugars and amino acids. Solubility of organic compounds and salts is very important for life because it buffers reaction mixtures to resist changes in pH, salinity, and even oxidation states. An environment that best supports life is one with stable concentrations of essential biomolecules.

Another very important feature of water’s physical properties is the hydrophobic effect of large, nonpolar compounds. Nonpolar and polar substances do not mix very well in solution, which is why nonpolar molecules tend to conglomerate in a solution of polar molecules. In other words: non polar molecules stick to each other much more tightly when surrounded by polar molecules.

This presents problems for abiogenesis. Small bioorganic molecules would not dissolve very well in ammonia. Proteins and membranes may be unstable in a solution of ammonia because they may not fold properly. Membranes and lipids become an even bigger issue; if cell membranes do not sufficiently pack together, then cells could break apart in even mild environmental changes. Life would be less adaptable in an environment of ammonia than in an environment of water.

The stability of liquid ammonia itself warrants concern. Theoretically, life can only be supported in a liquid, not a gas or solid. If boiled off too quickly or too easily, organisms may find it harder to adapt to the environment. Ammonia exists as a gas at room temperature, while water is stable as a liquid from a temperature range of 0 to 100 degrees Celsius. This is due to the strength of hydrogen bonding: the stronger the hydrogen bonds, the more likely the molecules will stick together long enough to condense into a liquid. Ammonia has weak hydrogen bonding, which is why the temperature must be lowered dramatically under normal atmospheric pressure to stabilize ammonia in the liquid state; we are talking about a world that must undergo a 4-billion-year Ice Age. A cold, dead planet is hardly an ideal candidate to support life. 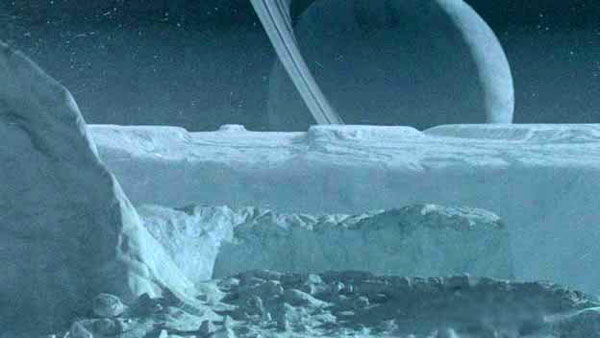 Ammonia’s boiling point is -33 degrees Celsius under 14.7 psi of pressure, which means that liquid ammonia is only stable below this temperature at Earth’s atmospheric pressure. Supposing for a moment that the folding, conglomeration, and solubility of organic molecules were thermodynamically probable, a global temperature would have to be maintained from -78 degrees Celsius and -33 degrees at 14.7 psi. This is too narrow a band for organisms to thrive; any mild climate fluctuation may actually threaten the survival of ammonia-based life. The metabolism of nutrients and the replication of organisms would be disrupted by periods of extreme lows and highs. 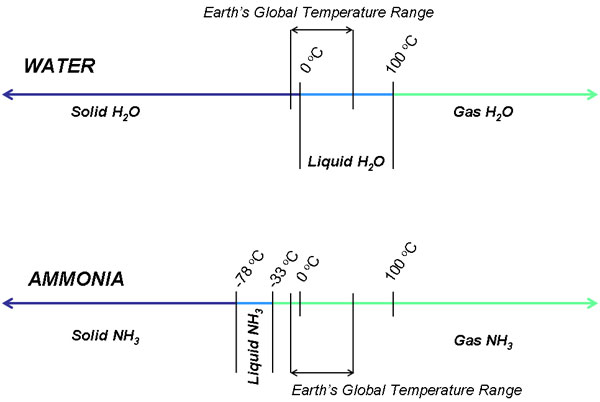 The only workaround solution for this problem is the condensation of a gas using a higher atmospheric pressure rather than a lower temperature. Gas can be condensed to a liquid under extreme pressures, and the temperature can be maintained well above its normal boiling point (which is good news for an ammoniated climate in which life requires heat to thrive). Ammonia condenses to a liquid under a pressure equivalent to 12.1 thousand Earth atmospheres at around 37 degrees Celsius. Unfortunately, we have yet to discover or hypothesize a way in which a planet could harbor such a dense atmosphere. Venus, a terrestrial planet with the densest known atmosphere today, has a pressure value of 93 bars at the surface; this hardly meets the atmospheric demand of 12,000 bars. Jupiter, the next best choice, only has a maximum pressure of around 1000 bars at the center of the planet; again, hardly ideal for our purposes. Similar planets are unlikely to have atmospheric pressures high enough to condense ammonia into a liquid, though that does not mean ammonia-based life cannot emerge by some other means.

Ammonia-based life isn’t a major theme of Star Trek, and I’ve always wondered why it was never included on the shows. Unfortunately, it is unlikely to be a Science Fact. It is important to note that many things initially considered impossible in science were eventually proven by science, or at least to some extent. As I always stress in my articles: just because something seems highly unlikely, it doesn’t mean it can’t happen. We have yet to discover ammonia-based life, or any life elsewhere for that matter, before anyone, even me, can say that ammoniated aliens can or don’t exist. In the absence of absolute evidence, speculation is the best we can hope for.

On that note, I would like to conclude with this awesome edited excerpt from Carl Sagan’s Cosmos, in which he hypothesizes a likely scenario in which life could evolve on a world like Jupiter.

Just because something seems improbable to occur, we are always amazed in science to find that sometimes, no matter how unlikely, the opposite is true. Even if ammonia-based organisms may not exist by our Earthly standards, it does not imply by any means that it cannot happen any other way.