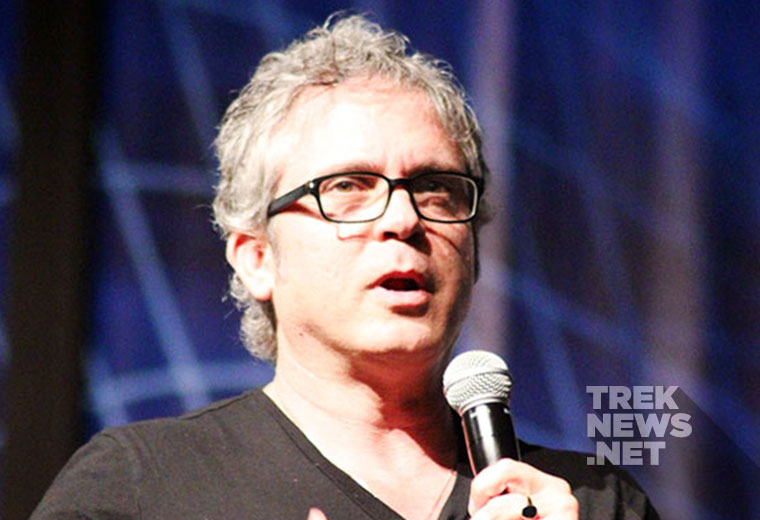 Brannon Braga has been one of the more polarizing figures in the world of Star Trek over the years. Braga, who began his career in Star Trek working as an intern on The Next Generation, would go on to write several episodes of that very show and would go on to work on Voyager, Enterprise, and two feature films.

In a recent interview, Braga discussed his history with Star Trek, from television to film and the lasting impression the franchise has made on his life.

“I started on Star Trek 21 years ago and I finished… I couldn’t tell you for sure. Enterprise ended six or seven years ago. It was 2005, so that’s six years ago. Strangely enough,”

“So, Star Trek is very much on my mind and it feels very present. However, having said that, I just did an interview for a TNG book that’s coming out next year, and I spent about two hours on the phone being asked about every single episode I wrote.” Braga said. “And I’ve got to tell, I could barely remember them.” he added.”

“it was a pretty remarkable journey from intern to Star Trek being my life for 15 years.”

Discussing how he got started with Star Trek, Braga said “I was in my last year of college at U.C. Santa Cruz and there was an internship program in scriptwriting offered by the Academy of Televison Arts & Sciences, and it just happened to be with TNG that year. It was really Michael Piller, may he rest in peace, who picked me out of a group of finalists to be the intern on TNG. I really owe everything to Michael. I learned so much of what I know today about this craft from him and the other people on staff. I had an eight-week internship and basically it just never ended. I got a script to rewrite with my good friend Ron Moore. I got a script to write on my own. Then they hired me on staff. And then, however many years later, I was running Voyager and then I co-created Enterprise. So it was a pretty remarkable journey from intern to Star Trek being my life for 15 years.”

“The episode I’m most proud of is “All Good Things…,” which was the final episode, and I’m proud of that for a lot of reasons. Top of the list, it was just a really great two-hour episode of TNG that fully explored the characters and the sentimentality of where they started, where they are and where they’re going. It had a great science-fiction premise. And it kind of achieved the impossible. I have no recollection of how Ron Moore and I did it, but it was a great ending to a great series. It didn’t disappoint.”

Shifting the conversation toward Star Trek: Voyager, Braga said “Voyager was a bit of a paradox in that it was more challenging because we didn’t have the mass popularity that TNG had. We didn’t have Captain Picard. Don’t get me wrong. I loved Captain Janeway, but Captain Picard was tough to beat. Kirk and Picard are tough acts to follow and I think, at that point, there was already some Star Trek fatigue settling in.”

When Jeri Ryan’s character, Seven of Nine was added in the fourth season, many fans were upset with the idea of having a woman with Ryan’s figures on the show, proclaiming she was only added for her aesthetic attributes.

“The show needed a kick in the ass.”

“The show needed a kick in the ass. Creatively, we needed something. A Star Trek series, in my opinion, is only as good as its captain, and Captain Janeway was a great captain, but she didn’t have her Spock or Data, really. We just didn’t have that special science-fiction character like Spock or Data, the striving-to-be-human character. The idea of putting a Borg on board gave us a chance to have a wild child there. That was the metaphor, a wild child, and Janeway would be her mother and try to tame her and help make her human again. That was a new take on that kind of character.”

“That’s not to diminish the Doctor, Bob Picardo’s character. He was great, but he really wasn’t a foil to Janeway. He wasn’t someone Janeway could play off of. To me, Seven of Nine added a nice touch of magic that the show needed at the time. The fact that she was a beautiful woman was just, to me, a benefit. A lot of people thought it was in poor taste that we had a buxom babe, but I’m like, “Have you actually watched TOS?” That was babes on parade. Kirk would be considered a sex addict by today’s standards. A certain sensuality has always been at the heart of Star Trek. So I’d dispute that criticism of Seven. I thought the character was a great addition to the show. And it kind of lit a fire under the cast, too. It was very controversial. We got rid of Kes and brought in Seven of Nine, and some people in the cast were upset about it and some thought it was cool, but at the end of the day I think it did all the right things creatively to the show, in my opinion.”

“Kirk and Picard should have been locked in battle on spaceships, on their respective bridges, and not cooking eggs.”

Braga along with Rick Berman co-wrote the Star Trek films Generations and First Contact. Braga went on to discuss them, saying “Writing the movies, those were amazing experiences. It was a different kind of storytelling. It was an opportunity to write feature films, which I’d always wanted to do. It led to some other feature work. Ron and I were new writers and we’d never written a movie before when we did Generations. We were trying to serve a lot of masters and we were passing the baton from one generation to another. I didn’t turn out as well as I would have liked.”

“I don’t want to speak for Ron or for Rick Berman, but I think that Kirk and Picard should have been locked in battle on spaceships, on their respective bridges, and not cooking eggs. I can say that now that enough time has passed. I just don’t think it was the right second half of the movie, personally. If a fan wants to sit down and watch Generations with the commentary Ron and I did for the DVD, we’re pretty honest about what we liked and don’t like about that film.”

Read the entire interview with Brannon Braga at StarTrek.com.

In this article:Brannon Braga, Interview