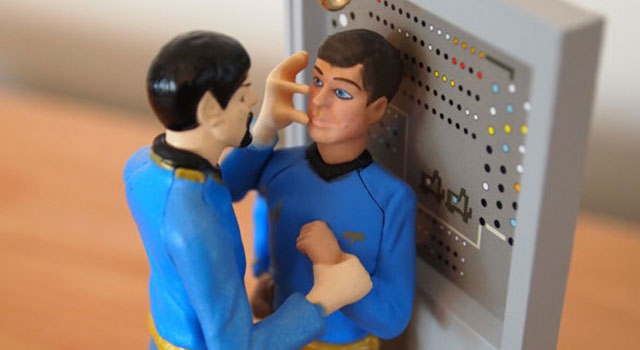 For thirty years Star Trek ornament have been produced by Hallmark. This year they’ll add four new additions to their lineup. Three have been made available at local Hallmark stores and a fourth, based on the TOS episode “The Tholian Web,” will be available only at New York Comic-Con in October.

Read about this year’s holiday offerings along with a preview for next year, below.

In 2010, Hallmark started a new line of ornaments called Star Trek Legends based on the crew of the original Star Trek, beginning with with Captain Kirk. Logically, this year the second ornament in the line is Mr. Spock. Sculpted by artist Anita Marra Rogers, the ornament features the science officer scanning with his tricorder.

Continuing a line of ornaments that began in 2004 based on famous moments from original Star Trek episodes, the new “Mirror, Mirror” ornament by Valerie Shanks has alternate Spock mind melding with Dr. McCoy. Leonard Nimoy’s dialog from the episode is included, as are sound effects from the show. The ornament is about tall, with detailed paneling of the I.S.S. Enterprise and the inclusion of the Terran Empire’s logo on the back of the ornament. This ornament could be displayed all year on a desk or shelf, along with the previous episode ornaments for a nice presentation, thus giving fans an all year purpose to the ornament. 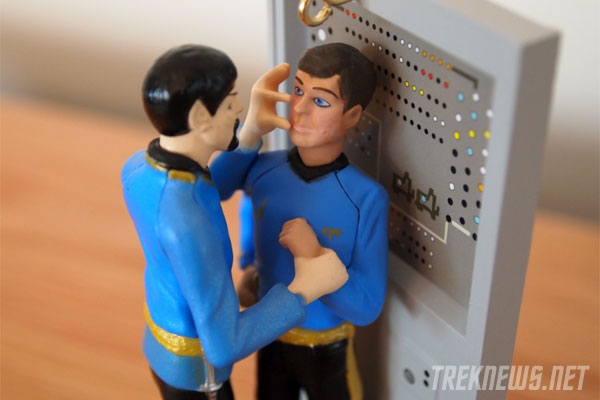 The Romulan Bird of Prey includes lighting effects and was sculpted by the venerable artist Lynn Norton. 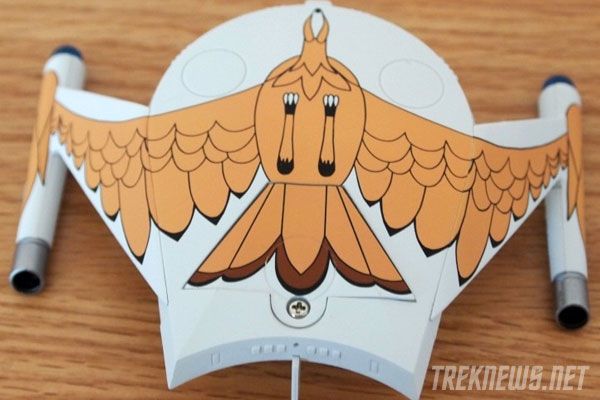 All of the 2011 ornaments are available now at most local Hallmark
stores, except the U.S.S. Defiant as featured in the episode “The Tholian Web” which will exclusive ornament, limited to an edition of 700, and available for those attending the New York Comic Con (October 13th to the 16th). In 2009, Hallmark had a San Diego Comic Con exclusive of Uhura which has proven to be one of the most popular (and expensive in the secondary market) ornaments of the line.

The Defiant is based on a 2006 Enterprise ornament and features a glowing green paint as your ornament simulates phasing in an out of our known universe. Be careful not to have your Christmas tree phased out as you decorate.

Hallmark has announced that next year’s ornaments are Dr. McCoy
from the Star Trek Legends line, an ornament of Spock meeting Prime Spock from the 2009 movie, and a 25th anniversary tribute to Star Trek: The Next Generation with a U.S.S. Enterprise 1701 D ship.

Other Ornaments for Sci-Fi Fans

Check out all the Keepsake Ornaments at Hallmark’s website or attend the October 8-9th Ornament Debut Weekend at most local Hallmark stores.