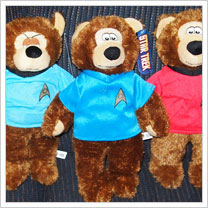 In Star Trek V: The Final Frontier, Captain Kirk battled against Klingon Commander, Klaa. Now you could battle against Claw!

The Toy Factory, a company that produces plush prizes in claw vending machines, has produced a new line of licensed Star Trek teddy bears for 2011.

Fans with steady nerves and a few extra quarters could try and use a claw to get one of six different bears at select local vending machines. Each bear is approximately 12″ tall and each features a face customized to represent a character.

There are two Captain Kirk versions (yellow command shirt and green command shirt), a McCoy bear (featuring his unique short sleeve shirt), Spock (with, of course, customized ears and eyebrows), Scotty, and a Klingon bear. The company promises more in the line.

Star Trek teddy bears have been produced by a number of companies during the years, including by the venerable Vermont Teddy Bear company. These new Toy Factory teddy bears are among the nicest and most fun in their Star Trek design elements.