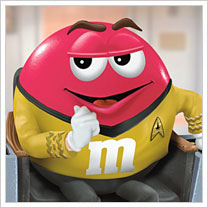 A most unusual Star Trek collectible collection is starting this January from the Hamilton Collection: statue figurines of M&M’S ® brand versions of the 1960s crew!

The first approximately 4” tall resin figurine is entitled “To Boldly Go Where No Man Has Gone Before” and will be M&M’s “Spokescandy Red” character dressed as Captain James T. Kirk in his iconic chair. The figurine includes hand painted details. The collection continues with issue two, “Live Long & Prosper” (presumably an M&M dressed as Spock) and three, “Bad News Gentlemen, I Melt For No One” (which hasn’t been revealed yet).

Star Trek is following in the proverbial footsteps of Star Wars which during its 2005 Episode III: Revenge of the Sith marketing campaign had a successful partnership with M&M’S creating candy editions of famous characters from a galaxy far, far away.

What strange new world will Captain James T. Kirk™ and his famous crew of the U.S.S. Enterprise™ explore next? Only Red knows for sure! Now, the M&M’S® Brand Spokescandies pay tribute to Star Trek® with the M&M’S Brand Star Trek Figurine Collection, available only from The Hamilton Collection. Your collection of Star Trek® figurines begins with Spokescandy Red as Captain James T. Kirk in Issue One, To Boldly Go Where No Man Has Gone Before. Your collection continues with Issue Two, Live Long & Prosper and is soon followed by Issue Three, Bad News Gentlemen, I Melt For No One and additional M&M’S brand figurines, each a separate issue to follow.

Each officially-licensed, handcrafted figurine in this collection is filled with hand-painted details and is a perfect gift for a Star Trek® fan or an M&M’S® brand collector. Strong demand is anticipated for these limited-edition M&M’S® brand collectibles, so don’t delay. Order now!

• Explore strange new worlds™ with this collection of Star Trek figurines, available only from The Hamilton Collection

• Editions are limited to 95 casting days, so order now

• Hand-numbered with matching Certificates of Authenticity