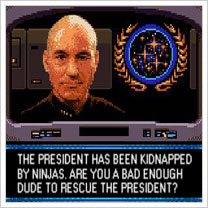 Earlier this week, I found myself in a bit of a dilemma. The video gaming bug was bitin’ hard, but what to play? I was burned out with online games; Rock Band would wake my slumbering bride; and I’m too much of a dinosaur to have games on my phone. Could Star Trek rescue me from this predicament? Of course it could! Hence I rushed to the closet, pushed aside my Super Powers action figures and Darth Vader Voice Changer helmet, and revealed my salvation: my SEGA Game gear, circa 1992. It was time for a little Star Trek: The Next Generation — The Advanced Holodeck Tutorial.

Developed by Absolute Entertainment, Inc. and released to eager Trek gamers in 1994, The Advanced Holodeck Tutorial puts players on the bridge of a holographic recreation of Picard’s U.S.S. Enterprise for their final exam at Starfleet Academy… provided the “cadet” has six AA batteries to power SEGA’s monolithic handheld. Digging for Duracells, I was reminded why I hadn’t played this game since the Clinton administration. Not wanting to empty out all my Wii remotes, I opted to connect the brick to my car battery and try that instead (online sources promised at least three hours of playtime this way; more than enough). With my Optima’s engine humming and the Game Gear chugging along nicely, I was welcomed to Starfleet Academy. 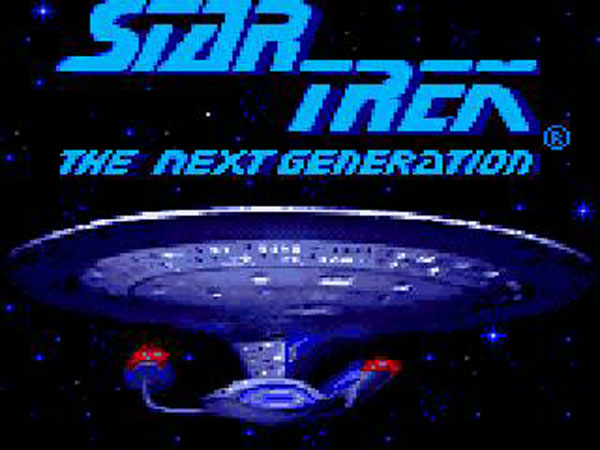 It was like I was there! There was no time to banter with Boothby, though; Captain Picard had a mission (and you had best believe I chose to accept it). Apparently, Talarians were attacking a freighter near Crystalia and their warp core was going to blow! It was up to me and the other five people on this holographic spaceship to save their bacon. I commanded Mr. Data to set course for Crystalia, MAXIMUM WARP, and we were on our way.

Upon arrival, I found empty space and stars. That was about it. It took me a few minutes to remember how to bring up the sensors so that I could see… more stars. Hmmmm. Change Magnification? That sounded good… then I was being shot at. By somebody. Somewhere. True to the television series, my bridge officers were happy to talk about that, but weren’t about to do anything about it until I gave the go-ahead. That’s good training! I asked Worf to raise shields and arm the weapons systems. The ship then floated aimlessly for a bit as I tried to remember how to steer. Things were not going well. 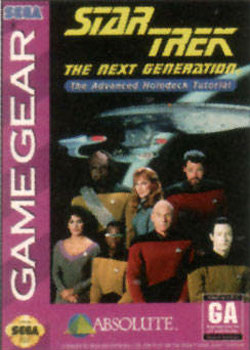 As any seasoned video gamer will tell you, when in doubt: button mash! After slapping around my twenty-year-old handheld gaming device for four minutes, I managed to turn the ship and find my attacker (or the freighter? I wasn’t too sure). Remembering my tactical training from the academy (and Star Trek: Online) I was ready to drain my target’s shields with my phasers before delivering the killing blows via photon torpedoes. Apparently the Talarian technology of 1994 could only handle two PEW-PEW’s before my victory was assured, however. High on my own success, I turned my attention to the wounded freighter and her endangered crew. “Chief O’Brien,” I cried, “lock on and transport survivors!” At which point Miles politely informed me that we needed to be closer to the freighter.

After finally inching the Enterprise up to the freighter, I dropped shields (thank you, Mr. Worf, for reminding me) and began to transport. Just like in real-life, I had to move a tiny box across a glowing TRON grid to find digitized representations of terrified survivors running wildly away from my transporter lock, their tiny arms thrashing and flailing wildly. Or maybe that’s just how the Game Gear animates people walking. Either way, Chief O’Brien and I beamed them up just in time. My first mission was complete, Captain Picard congratulated me, and I was reminded that I could continue my progress in the future by proving to the Game Gear I remembered the name of Data’s cat. 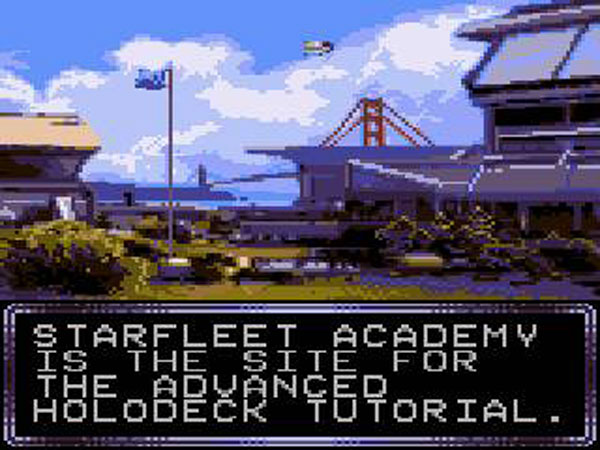 As goofy as all that sounds, I adore this game. I remember playing it endlessly when I was younger, and it’s the biggest reason I have my Game Gear accessible (behind the figures and the helmet) today. Ship-to-ship combat may be a bit weak, but the transporter operation and re-routing of power in engineering are done extremely well; the former is actually incredibly similar to the way transporters are portrayed in the recent Star Trek reboot. The graphics are good for a game this age, and the sound effects are fun (if not entirely accurate). It’s no “A Final Unity,” but then: what is?

Until Star Trek: Online goes free-to-play, I know what I’ll be playing to scratch my Trek Gaming itch. I’ll just have to keep a close eye on my car battery.

In this article:Federation Follies, Video Games