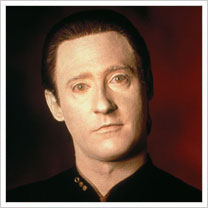 Brent Spiner, who played Lt. Commander Data on Star Trek: The Next Generation, recently sat down with StarTrek.com to discuss his time with the franchise along with some of his current projects, including his web series, Fresh Hell.

Spiner will also be a guest star, along with former TNG castmate Wil Wheaton, on tonight’s episode of the CBS hit comedy, Big Bang Theory.

“It’s very brief. It’s not even a cameo. It’s a cam. By the way, I have my own terms for everything. My appearance on Big Bang Theory is a cam, not a cameo.” Spiner joked.

Spiner discussed working with Wheaton again, saying “I see him a lot because we’re at conventions together, but we were standing backstage waiting to make an entrance and he said, ‘I think this is the first time in years that we’ve worked together.’ He was in Nemesis, but his scene got cut, so that doesn’t count. And I don’t think I was in the scene with him.”

He went on to discuss the role of Data on TNG and how quickly he got a handle on playing an android, saying “I think fairly quickly because I realized pretty early on that there was really no precedent for it, that I could do pretty much anything I wanted and the audience would either accept it or they wouldn’t. But there was nobody to say, ‘Oh, that’s not what an android would do’ or ‘That’s not how an android would behave,’ because there weren’t any other androids at that point on weekly television.

Even in the audition process, there was the question of, ‘Should we play this character like a machine, like a robot, or should we make him closer to being a person?’ And we all agreed, finally, that it would be really tedious if I played him like a machine and a robot for seven years, if we went that long. So we decided to make him much more of a person who was growing in his humanity as time went on.” he continued.

In the mid-nineties Spiner was vocal about not wanting to play the character of Data indefinitely, because unlike an android, he ages.

“I was 38 when I started playing Data. So it occurred to me, ‘How long is this going to last?’ I looked pretty young for my age at the time, but I thought, ‘If I was 10 years younger, I could play this for 30 years.’ But I wasn’t. I was pushing 40. I thought, ‘How long am I going to look acceptably young to keep playing this part?’ Fortunately, it lasted as long as it did.”

After seven seasons of TNG and four films, Spiner returned to the role of Data in a few episodes of Star Trek: Enterprise.

“That was fun. It was a nice bunch of people and it was a lot of the crew I was used to working with. LeVar (Burton) directed one of the episodes. It was a blast. And I knew Scott (Bakula) from before, so that was fun. ”

Read the entire two-part interview with Brent Spiner at StarTrek.com.