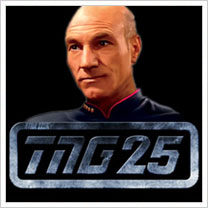 Creation Entertainment, the company who promotes and operates the Official Star Trek Conventions (licensed from Paramount), has released a full schedule of their 2012 events.

With stops in the Philadelphia/New Jersey area, San Francisco, Las Vegas and Chicago, next year’s conventions will celebrate the 25th anniversary of Star Trek: The Next Generation, which launched in 1987.

Below is a list of the conventions and announced guests.

The Philadelphia area convention will take place Friday, May 4 through Sunday, May 6th at the Crowne Plaza Hotel in Cherry Hill, New Jersey.

Patrick Stewart has been announced as the special guest and headliner of the convention.

Gold Weekend packages for Philadelphia are now available for $379 at Creation’s website. Additional packages as well as single day passes will be made available in the future.

The San Francisco convention will take place Friday, July 27 through Sunday, July 29th. A location and guest list for the event has yet to be announced.

The biggest Star Trek convention of the year returns to Las Vegas, Thursday, August 9th through Sunday, August 12th. This year the “Vegas Khaaan” returns to The Rio All Suites Hotel.

William Shatner will headline the convention with an on stage appearance on Sunday. Kate Mulgrew appear on Saturday and Sunday. Jonathan Frakes, Brent Spiner and John de Lancie have also been announced.

Gold weekend packages for Las Vegas are now available for $699 at Creation’s website. Additional packages as well as single day passes will be made available in the future.

The Chicago convention will take place Friday, October 19th through Sunday, October 21st. A location has not been officially announced.

This is only a partial list of guests for each convention. Additional names will undoubtedly be added over the next few months.

Check back for the latest information on all of Creation’s Star Trek conventions, along with news on independent conventions as well.