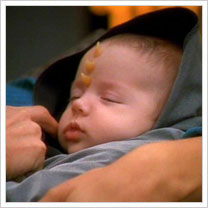 Last week my wife and I welcomed our first baby into the world, and I’ve realized something: these tiny, brand-new people are kind of a big deal. As family and friends swarm around us to meet the lil’ monkey, I also realize: I have no idea what I’m doing with this kid. Naturally, I was inspired to write another in my series of articles that desperately attempts to validate those old “All I Need To Know About Life I Learned From Star Trek” posters: I would turn to Star Trek, which has quite a few examples of childbirth, childrearing, and other child-things.

Ian Andrew Troi
Counselor Deanna Troi is impregnated by a glowing alien presence which then (over the course of a few days) comes to term, is born, lives as a human child, and then reverts to energy or something. Or, as Jean-Luc Picard might say: “A lifeform of unknown origin and intent is breeding right now inside Counselor Troi.”

Lesson Learned: Kids don’t really grow up that fast, I guess. Comparatively speaking. They can prove threatening to the ship, though.

Kirayoshi O’Brien
Hmmm… transplanted from his mother’s womb into that of an alien, resulting in an accelerated pregnancy? The worst aspect of which was sneezing? That being said, I’m not crazy about rubbing the feet of a Bajoran freedom-fighter, though. Yikes.

Lesson Learned: Help my wife discover her “Inner Bajoran” before her next pregnancy.

Naomi Wildman
Born twice simultaneously on two twin Voyagers due to a spatial scission, Naomi Wildman was the first of two children born to the Federation crew in the Delta quadrant. One of the Naomi-s died due to a fetal transport-related issue; the other appeared doomed when her ship was set to self-destruct. Thankfully, a second Harry Kim carried the child to the mirror-version of the ship and… I’m realizing that the original crew died, and the rest of the series was duplicates? Or were just Harry and Naomi…?

Lesson Learned: … so does this happen with the transporters, too? Like in “The Prestige?” I learned nothing about babies here.

Nagilum
Nagilum is a giant floating evil space baby. Don’t be thinking you can argue that in the comments, either. Dude creeps me out.

Xyrillian Baby
Commander “Trip” Tucker, from the ol’ NX-01 tries to help somebody out, and she gets him pregnant. As a guy, the thought of being pregnant (as a guy!) is almost more terrifying than Nagilum. Plus, I think there were wrist nipples? It’s been awhile.

Lesson Learned: Not worth the risk; our son is officially an only child now.

… y’know, maybe this wasn’t the best way to learn about kids. Do you think they have any books I could read, somewhere?