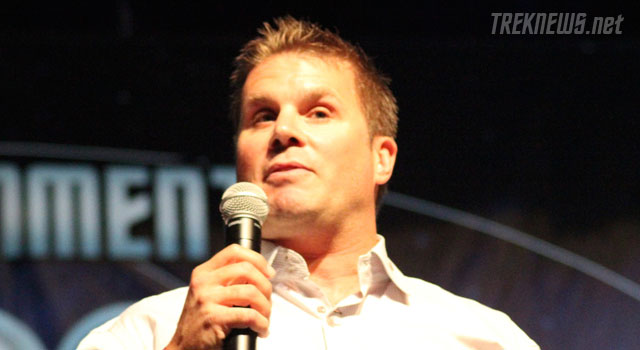 On October 19th 2011, the Roddenberry Foundation donated $5 million to the Gladstone Institute of the University of California, San Francisco. The generous gift will allow the biomedical research group to establish a new center for stem cell studies and regenerative medicine, which will be named in honor of the legendary founder of Star Trek: Gene Roddenberry.

Gene Roddenberry was an influential writer and producer of science fiction. His concept of Star Trek, an epic vision of a future graced by reason and peaceful exploration, forever changed the genre. Like many original film writers at the time, Roddenberry felt science fiction needed a serious rewrite, something that portrays Mankind in His finest moments, to make struggles more realistic and practical; he wanted a science fiction that not only encouraged its fans to make the world a better home but also represented science as an attainable goal rather than a mystical construct. “No more magical gadgets that launch spaceships to nearby planets,” was probably Roddenberry’s thinking when he conceived of Star Trek. “We are going to warp space in accordance with Einstein’s Theory of Relativity!”

Established by philanthropist Eugene “Rod” Roddenberry, Gene’s son, the Roddenberry Foundation honors and continues the progress toward that glorious future so imagined by the man himself, even after his passing. Their mission is to support the efforts of individuals, companies, and organizations to advance society on four different fronts: (1) Education, (2) the Environment, (3) Humanitarianism, (4) Science and Technology. On the fourth pillar, the Roddenberry Foundation fulfills a small, but very important aspect of Gene Roddenberry’s goals for a better future by donating the sum of five million dollars to the Gladstone Institutes in order to advance stem cell research toward clinical applications. 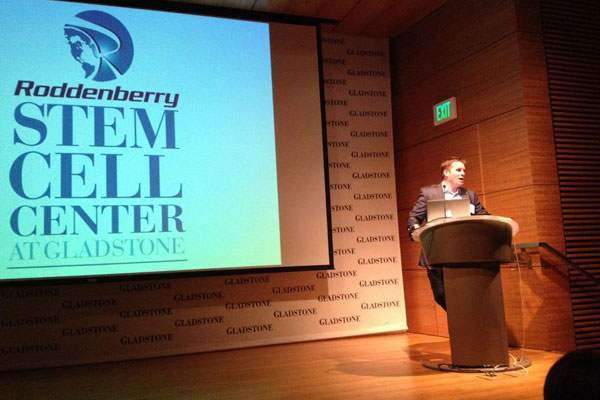 Rod Roddenberry announces the donation at the Gladstone Institute

Funding stem cell research is perhaps as crucial as space exploration is in supporting a dynamic, diverse world. In their promotion of stem cell research, the Roddenberry Foundation is in fact bringing Mankind a step closer to that future where “diseases are a thing of the past.”

Read the release below.

SAN FRANCISCO, CA—October 19, 2011—The Gladstone Institutes and the Roddenberry Foundation today inaugurated the Roddenberry Center for Stem Cell Biology and Medicine at Gladstone, a new unit founded on an unprecedented $5 million gift from the foundation that was established to honor the legacy of Star Trek creator Gene Roddenberry.

“This gift is our largest to date, and with it, we hope to help accelerate advances in biomedical research,” said Gene Roddenberry’s son Rod Roddenberry, who is co-founder and chair of the board of directors of the Roddenberry Foundation. “In addition, if our support can inspire one child to become a scientist, one organization to become more charitable, one person to simply invest himself or herself in improving the future of our world, then our foundation can be a catalyst in making the future envisioned through Star Trek a reality.”

The center will build on Gladstone’s existing expertise in stem cell science, helping to speed the process by which discoveries are turned into therapies for a host of devastating illnesses.

“Today’s biggest challenge for solving disease is getting the investments required to transform our basic-science discoveries into health solutions that can alleviate human suffering,” said Deepak Srivastava, MD, who directs both stem cell and cardiovascular research at Gladstone. “We are a basic science institute—but with the purpose of solving three major disease groups.”

Indeed, Gladstone focuses on disease areas that afflict millions of people and their families: cardiovascular disease, viruses such as HIV/AIDS and neurological conditions such Alzheimer’s disease. Alzheimer’s alone afflicts 5.4 million people in the United States at an annual cost $183 billion, estimated the Alzheimer’s Association. Without a therapeutic breakthrough, the number of Americans with Alzheimer’s disease is expected to double by 2050.

On top of this, no single disease-modifying therapy exists for Alzheimer’s or other devastating neurodegenerative diseases, said Steven Finkbeiner, MD, PhD, a senior investigator at Gladstone, adding that it takes an average of 12 years and as much as $1 billion to develop a drug for a neurodegenerative disease. “The tsunami is coming and we have nothing in the drug pipeline to treat Alzheimer’s,” he added.

Research at the new center can help to change that, in part by building on pioneering work done by Gladstone senior investigator Shinya Yamanaka, MD, PhD. In 2006, Dr. Yamanaka and his Kyoto University team discovered how to reprogram skin cells into cells that, like embryonic stem cells, can develop into other cells in the body. This discovery of induced pluripotent stem cells, or iPS cells, has since altered the fields of cell biology and stem cell research, opening promising new prospects for both personalized and regenerative medicine. Dr. Yamanaka currently divides his time between Kyoto and San Francisco, as the director of Kyoto University’s Center for iPS Cell Research and Application (CiRA)—which focuses on drug discovery and regenerative medicine—and as a senior investigator at Gladstone.

To further develop Dr. Yamanaka’s iPS technology in order to create patient solutions, the Roddenberry Center for Stem Cell Biology and Medicine at Gladstone today is also announcing a collaboration agreement with CiRA. This accord will clear a path for these two leading stem cell centers to freely exchange materials and knowledge—all in order to accelerate the advancement of their stem cell research results into therapeutics to improve human health.

Ideally suited to do that, iPS cell technology and subsequent cell-reprogramming discoveries opened the door for scientists to create human stem cells from the skin cells of patients with a specific disease for research and drug discovery, rather than using conventional models made in yeast, flies or mice. As a result, the cells contain a complete set of the genes that resulted in that disease—representing the potential of a far-superior human model for studying disease development, new drugs and treatments—while also avoiding the controversial use of embryonic stem cells.

“The Roddenberry gift will help us create the human, iPS-based disease models that we need to accelerate the development of drug therapies for a host of devastating diseases, honoring Gene Roddenberry’s call to ‘live long and prosper,’” said Dr. Srivastava.

About the Gladstone Institutes
Gladstone is an independent and nonprofit biomedical-research organization dedicated to accelerating the pace of scientific discovery and innovation to prevent illness and cure patients suffering from cardiovascular disease, neurological disease or viral infections. Gladstone is affiliated with the University of California, San Francisco.

About CiRA
Following the generation of human iPS cells by Dr. Shinya Yamanaka and his team in November 2007, Kyoto University established the Center for iPS Cell Research and Application within the Institute for Integrated Cell-Material Sciences (ICeMS) in January 2008 to further promote scientific advances in the fields of induced pluripotency and reprogramming. CiRA is the world’s first institute to focus specifically on these areas, and its researchers strive to realize the potential medical benefits of these cells as rapidly as can safely and responsibly be done. CiRA became an independent institute in April 2010, under the leadership of Dr. Yamanaka.

In this article:Rod Roddenberry, Science