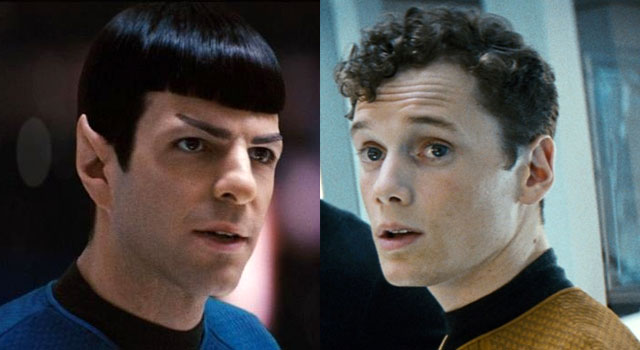 Star Trek actors, Zachary Quinto and Anton Yelchin, recently sat down with MTV to discuss current projects Margin Call and Like Crazy. During the interviews, each of them were asked about preparing for the next Star Trek film along with thoughts on the news that J.J. Abrams will be back in the director’s chair for the sequel.

While rumors were running rampant for months leading up to it, in September Abrams officially announced he would direct the Star Trek sequel.

“I think it would be unimaginable to make that film without J.J., so to know that he’s going to be at the helm again and sort of manning the ship so to speak is pretty amazing,” said Yelchin. “We all have such tremendous respect for him and he’s such a brilliant human being that it gives you great confidence in going in to make this again.”

Quinto discussed preparing for a return to the role of Spock.

“I think figuring out the point at which we reenter the story will be informative and define a lot about how I prepare for it. There’s a transformation that takes place as we get ready to start. And actually the physical part of it is pretty significant,” said Quuinto.

Yelchin, for the first time in his career, will reprise a role on screen.

“It’s going to be really important to basically to pick up all the work right where I left off which is interesting because I’ve never done that before,” Yelchin said.

Watch the MTV video, embedded below.