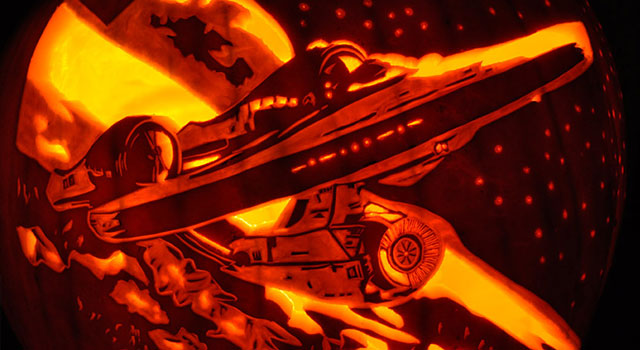 The weather is getting chillier, autumn is coming to a close, and the darkness seems to chase the daylight away a little bit sooner each night. Truly, the most chilling season of the year is upon us and the signs are everywhere: Sounds in the night suddenly seem more foreboding. Plastic tombstones and artificial dead people on the neighbor’s lawn. Discount candy & thrashed “Sexy” Spongebob costumes litter the floor of your local department store (probably by the recently displayed Christmas merchandise).

I think there’s probably a new Saw movie out or something. Whatever. It’s Halloween! And what better way to spend this weekend waiting for the big day (and candy-filled night) than to scare yourself silly with Star Trek? Follow me now, dear viewer, as we gaze upon the darker side of Trek:

“Wolf in the Fold” (Star Trek: The Original Series, Season 2)
Murder! Mayhem! Belly dancers! Is the chief engineer of the Enterprise going insane, blacking out and murdering the locals while on shore leave? Or is something far more sinister at work? You only get one guess, and if you’re wrong, I slap you.

“Night Terrors” (Star Trek: The Next Generation, Season 4)
This episode is what first got me thinking about a list like this. Although nothing supernatural occurs during the episode, there is some fairly disturbing imagery (especially a scene with Dr. Crusher “alone” in a cargo bay).

“Empok Nor” (Star Trek: Deep Space Nine, Season 5)
A different kind of terror, this episode has more in common with “Predator” than “Poltergeist.” As Chief O’Brien, Nog, Garak, and a handful of expendable newcomers search an abandoned (and poorly lit) Cardassian station for spare parts, they find themselves stalked by unseen forces… and possibly betrayed by one of their own. Also, the way the station is hanging crooked IN SPACE, where there is NO UP OR DOWN, is pretty darn creepy.

“The Thaw” (Star Trek: Voyager, Season 2)
If The Joker has taught me anything, it’s that clowns can be pretty terrifying… and a clown created as the physical manifestation of five people’s fears would be downright horrific. If watching Kim and Torres try to escape his carnival of horrors gets too frightening, just tell yourself that the clown is really Lenny from Laverne & Shirley. See if it helps.

“Eye of the Beholder” (Star Trek: The Next Generation, Season 7)
This one makes the list because “Geordi and Data remove a skeleton” is literally part of the plot synopsis on Memory Alpha. There’s suicide, murder, psychic vibrations that travel across time to torment the ship’s counselor… plus, Geordi and Data remove a skeleton. SPOOKY. For more murderous fun, see “The Meld” (ST: Voyager, Season 2).

“The Xindi” (Star Trek: Enterprise, Season 3)
Seriously, this whole season was basically Star Wars: Episode II: Attack of the Clones. More than anything on this list, THAT is truly chilling.

There are plenty more great ones (The salt vampire of M-113 in “The Man Trap” and Picard vs. Ardra in “Devil’s Due” strike me as appropriate). Feel free to leave any I missed in the comments, and have a Happy (and safe!) Halloween!
“Federation Follies” is a weekly humor column by Willie Laundrie II, taking a look at the lighter side of Star Trek.