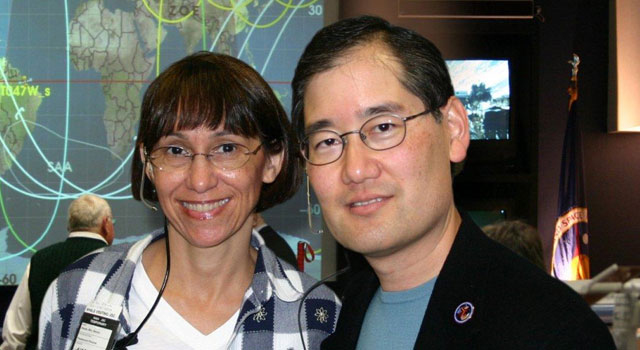 On his personal website, Star Trek consultant and designer, Michael Okuda discussed the work currently being done by CBS to remaster Star Trek: The Next Generation for release on Blu-ray next year.

As we reported previously, the first remastered offering, a sampler disc entitled Star Trek: The Next Generation – The Next Level, is scheduled to be released on January 31, 2012.

“Although the series itself was shot on 35mm movie film, the film was transferred to standard-definition video for all editing and visual effects work. This means that the finished show existed only in standard def video: This was great for 1987 television, but not-so-great if you watch it on a high-def screen.” Okuda wrote. “To remedy the situation, CBS is painstakingly rescanning the original film negatives and reassembling the episodes in high definition. We’re frankly amazed at the amount of work it takes to do this, but we think the results are well worth it.”

“The studio is also biting the bullet and rebuilding all of the show’s visual effects, using the original film elements wherever possible. We’re proud to be working with CBS on this project, helping to preserve the artistry of the original production designers, cinematographers, visual effects creators, and everyone else who worked so hard on that show.” he wrote.

“The great news is that the show looks fabulous in HD, which reveals so much of the elegant design work, craftsmanship, and photography that had been lost to the murkiness of standard def television. The groundbreaking Enterprise-D, so startling to those of us who grew up with Kirk’s original ship, shines more beautifully than ever. The debut release of Star Trek: TNG on Blu-ray is a sampler disk titled The Next Level.”

The sampler disc is currently available for preorder on Amazon for $15.99.