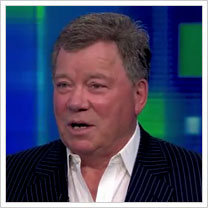 Captain Kirk himself, William Shatner appeared on CNN’s Piers Morgan Tonight, last Friday. During the interview Shatner discussed the longevity of his career, his new book, “Shatner Rules,” his role on Star Trek, his love of comedy, acting, writing and singing.

“I don’t feel 80 and I don’t know how to deal with that” Shatner said.

“I’m in torment. I’m in terror. I’m terrified.” Shatner jokingly remarked about his fear of dying.

When posed with the question of what he enjoys above everything else, Shatner said “I like making people laugh.”

He went on to discuss his time as Captain Kirk and how that role has shaped not just his career, but his entire life.

Shatner said he still enjoys doing Star Trek conventions and isn’t worried that he’ll be most remembered for his role on the show.

“My legacy is my wife and my children and my grandchildren,” he said.

Discussing his relationship with his former castmates [aside from Leonard Nimoy], Shatner said “They’re trying to sell a book,”.

Shatner said his former castmates feelings toward him took him by surprise. “I thought I was loved.” he remarked.

“I think he’s an admirable man and a great human being.” Shatner said of his friendship with Leonard Nimoy.

Shatener, who still does several Star Trek conventions every year, said when he walks into a convention there’s “fifteen thousand people going crazy and you’re in front of them and you don’t know what you’re going to say next.”

He said he used to get irked when fans would ask him to say “Beam me up, Scotty,” but he now embraces it.

“It’s a new facet to our civilization” he said about Twitter.

Watch Shatner discuss Priceline.com from the interview, below.

Listen to the entire interview on the Piers Morgan Tonight audio podcast on iTunes.