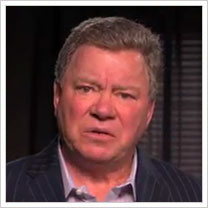 “It happens to everyone, but you never though it’d happen to you. You’ve been ‘unfriended’.” Shatner joked as he hosted a mock PSA called “Steps to Unfriending Recovery.”

The segment comically walks through the emotional process of being “unfriended” on Facebook, noting how you will no longer see the former friend’s updates or Farmville requests. Shatner describes the emotions a Facebook users will go through after being “unfriended.” Those emotions, according to the video, include denial, anger, depression and acceptance.

“Know that I will never UnFriend you.” Shatner said as he closed the segment. “For as a logical man once said ‘I have been and always will be your friend.” he added as he gave the Vulcan salute.

Watch the entire PSA, below.