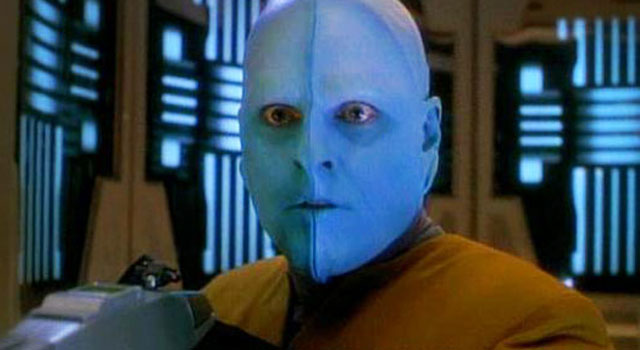 Bolians were primarily featured as minor characters in Deep Space Nine, The Next Generation, and Voyager. Their personae often ranged from cowardly to greedy, and their presence on the show seemed to serve the purpose of offsetting particular tones and moods. Well, the writers may not have done them much justice in the past, but in this installment of Strangers of the Cosmos, I plan to do just that: Give them the respect they deserve—or rather examine their biology a little further, which is more attention than they have gotten before.

Let’s start with the obvious details. One doesn’t need to be a biologist to figure out that they have blue skin. Like Andorians, Bolian blood is also blue. Assuming Bolians metabolize and transport oxygen the same way humans do (how else could they breathe in the same atmosphere as us), their oxygen-carrying proteins would utilize metal ions with an affinity to bind oxygen. In humans, hemoglobin uses iron(II) to bind oxygen; in fact, the red color in our blood comes from iron in its +2 oxidation state. In Bolians, the metal that binds oxygen is most likely copper(II) (again, in its +2 oxidation state). Copper(II) appears blue in solution, unlike most other transition metals with varying colors. Of course, skin color is independent of blood; the bluish tint in their skin is primarily due to pigments, the origins of which may be the result of natural selection for some unknown survival benefit. So remember: The color of blood-borne ions does not correlate with skin color; if it did, Vulcans would be green.

The Bolian “Flight or Flight” Mechanism

Don’t be confused by the subject title. I really meant “Flight or Flight” because Bolians seem to do a lot more running away than actual fighting on the show. In fact, Bolians were often presented as being overly cautious and paranoid on Star Trek. In the Deep Space Nine episode “The Adversary” (the season 3 finale) the Bolian security officer was always more jittery and paranoid about the Changeling imposter on the Defiant than everybody else. Though any person would be understandably paranoid if a potentially hostile Changeling was aboard a small ship, the Bolian remained more fearful and irrational than any other member on the Defiant. 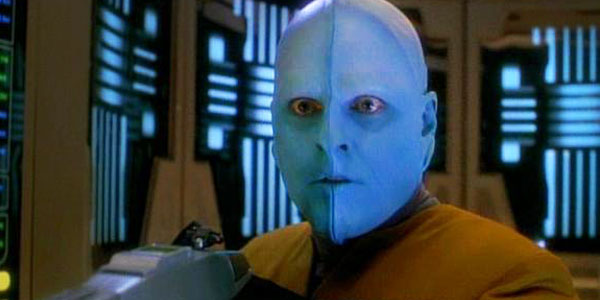 In one scene, he almost shot Captain Sisko and Major Kira out of a sense of self-preservation and fear, as though his discipline as a Starfleet officer were somehow neglected. Another instance was on Empok Nor, where Nog, Miles O’Brien, Garak, and a team of ensigns visit DS9’s sister station to salvage technical parts and components.

When a group of drugged, psychotic Cardassians were let loose in the station to hunt down the intruders, it is the Bolian, among all the others, who prefers to hide rather than go after the assassins. In fact, the Bolian says he would feel a lot safer with Garak on the hunt for the two Cardassians, implying that he would rather have someone else do the fighting for him (and of course Garak was also a highly trained spy and assassin in the Obsidian Order, so that fact more than influenced the Bolian’s decision). Even when other Starfleet officers were willing and able to defend themselves, the Bolian insisted on hiding.

Bolian security officer aboard the USS Defiant; he nearly shoots Captain Sisko and refused to lower his weapon when ordered to do so by two superior officers.

It doesn’t mean Bolians would always run from a fight (they wouldn’t volunteer in Starfleet otherwise), but they seem to be more prone to fear than any other race on Star Trek. This “flight” instinct may have been a crucial part of their evolution. If they evolved on a planet where their species were constantly preyed upon and where a direct confrontation with predators would almost always lead to defeat (as implied on the Deep Space Nine episode “The Magnificent Ferengi” in which it is said that Bolians have always been physically weak), then natural selection would favor the fitness of individuals with a tendency to run and hide for self-preservation.

The fearful, cautious, even paranoid Bolians would naturally avoid danger and survive long enough to have a greater chance to pass on their traits to offspring, while brave Bolians who probably didn’t have the strength to overcome threats to individual survival would likely die out quickly. The early Bolians with the ability to hide better would persist, survive, and reproduce faster than those who chose to fight in unwinnable battles.

A race of cautious, paranoid individuals is the logical outcome of a form of natural selection that favors fear as a means of survival. As such, their natural instinct to hide or run from danger may have influenced their social behaviors, which would explain why they appear to be scared on the shows. Of course it’s difficult to prove that their concept of fear comes from this “flight” mechanism from the standpoint of only a few examples (and in science, it takes A LOT MORE than just two data points to confirm a hypothesis), but this is, after all, only harmless speculation.

The Hairless Phenotype and Reproduction

Members of the Bolian race tend to be completely bald, with the exception for the few females who had hair on The Next Generation. Assuming Bolian genetics is anything like human genetics and that they have gene-carrying chromosomes the same way we do, it can be inferred that the hair/bald phenotype is a sex-linked trait, meaning essentially that the expression of a given trait correlates with gender.

This is not to say, however, that the baldness trait in Bolians is anything like the baldness trait in humans (which is also a sex-linked trait), but rather that the expression of the hair trait may be activated by genes on one (or several) sex chromosome(s). It may be that the expression of the hair trait is activated by a combination of functional genes. If this were the case, then the actual gene that directly produces hair isn’t necessarily in females only; it could also be in men.

One of the abducting aliens on the TNG episode “Allegiance” who took on the appearance and role of a female Bolian with hair; though not actually a Bolian, it can be assumed that females with hair are not uncommon among Bolians as neither Picard nor anyone else found her appearance to be suspicious.

It is really impossible to determine whether the hair phenotype is located on the sex chromosome(s) in Bolians, but certainly the genes that activate hair production is likely located on the sex-chromosome. If anything can be inferred from Star Trek, it’s that Bolian hair could be an ethnic and/or “sexy” trait used as a means to attract the opposite gender, hence the reason why some Bolian females have beautiful, voluptuous hair. For the same reason that large breasts and hourglass hips in human women attract males to potential mothers (large breasts for maximum milk production and a wide pelvic bone to support fetal development), hair may be a sexual indicator of potential mothers in Bolian females. Therefore, the gene that produces hair may be present in all Bolian females but is only activated when a combination of factors are present, such as those that enhance fertility in women. 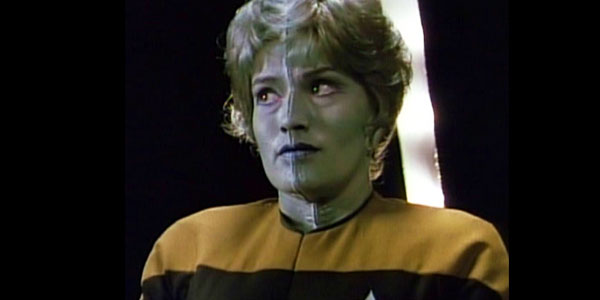 If this were the case, wouldn’t more females have hair because women with hair would probably reproduce and nurture their offspring better than bald women (and that males would prefer to mate with females with hair as opposed to unattractive, bald Bolians)? Instead, we’ve only seen one or two Bolian females on The Next Generation; all the rest were bald. It certainly may be the case that hair is not only a sexual indicator, but perhaps an ethnic trait as well. It’s possible that the Bolian species consists of many different ethnic groups from different regions on their home planet just like humans do. So hair may be apparent in certain ethnic groups where the association between hair and reproductivity was maintained by natural/sexual selection. If early Bolians migrated and diverged from this prime ethnic group and somehow lost that association (i.e. a new location means different selective pressures), then perhaps they also lost the “hair” gene. This would explain why so many Bolians, both male and female, are bald while only a few apparently still have hair.

In this article:Science, Strangers of the Cosmos